Emerging details of Hong Kong’s impending National Security Law have fueled concern over its unprecedented encroachment on the territory’s political and legal autonomy, despite what NYU’s Jerome Cohen describes as an apparent strategy to "gradually ease the people and the world into the new era rather than spring the whole repressive apparatus on them ‘cold turkey.’" Supporters, however, argue that the law will bring a necessary return to stability after the economic disruption of the past year’s anti-extradition and pro-democracy protests.

As noted by CDT Chinese editors, People’s Daily recently shared a graphic depicting the law as the largest of three gears meshed with two others representing economic growth in the territory. A caption spells out the message that "the National Security Law will bolster Hong Kong’s economy." Images of three gears interlocked in a triangle are a common graphical trope meant to suggest a synergistic combination of factors working smoothly in concert. In fact, as online commenters quickly pointed out, the gears in such an arrangement are locked in place. Douban user @言风斋 commented that "the three gears can only start turning if one of them is destroyed. Who else could come up with such an incomparably brilliant design? I laughed so hard my face and ribs ached."

The image’s contradiction of its intended message was seen as a possible example of gāojíhēi 高级黑, meaning "high level black," or sarcastic overenthusiasm. For other examples, see an excessively reverent title applied to Xi Jinping amid efforts to recenter him as the commander of China’s COVID-19 response, and arguments that extreme nationalist protests in 2016 were in fact meant to discredit patriotism. 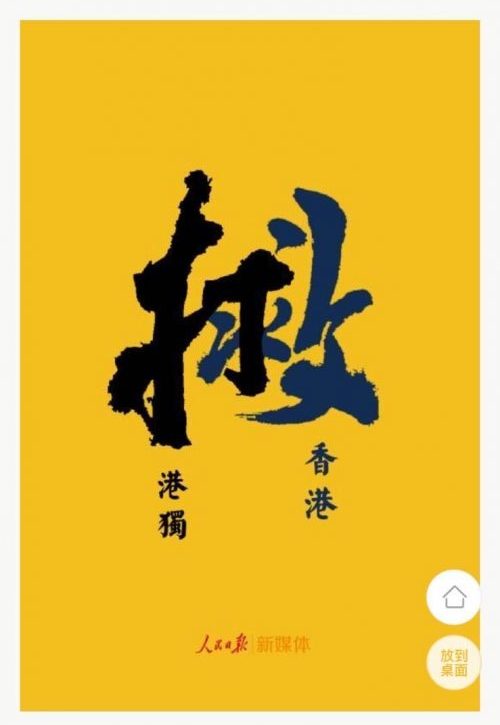 Independence has long had limited and marginal support in Hong Kong, and was not among the core "Five Demands" put forward by last year’s mass protests. Official propaganda, however, has insistently presented the movement as inherently separatist in order to demonize it in the eyes of the mainland public. Dialogue between supporters and opponents of the protests at the University of British Columbia suggested that this misrepresentation helped fuel the latters’ vigorous counterprotests last year.

The accelerating erosion of Hong Kong’s autonomy now appears to be increasing the appeal of independence. In a survey of protest slogans at Hong Kong Free Press on Friday, Jennifer Creery noted the spread in recent months of chants like "Hong Kong independence, the only way out," and "Hongkongers, build our nation."