Viral Content is a new CDT series introducing terms coined and used by Chinese netizens during the 2019-2020 COVID-19 outbreak. These terms include both subversive critiques of government policies and nationalistic support of them. Similar terms are being compiled and translated at China Digital Space, CDT’s bilingual wiki, as we expand it beyond the Grass-Mud Horse Lexicon to include short biographies of people pushing for change in China, topical resource pages, and special projects. 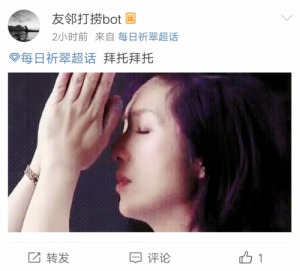 Coded wish for Xi Jinping‘s demise that appeared in February 2020 after he claimed to be “personally” directing the effort to fight COVID-19.

The term became a sensitive word on Sina Weibo shortly after it was coined.