Sensitive Words highlights keywords that are blocked from Sina Weibo search results. CDT independently tests the keywords before posting them, but some searches later become accessible again. We welcome readers to contribute to this project so that we can include the most up-to-date information. You can also browse our archive of sensitive words.

Anger has been high in recent weeks over the Chinese government’s response to the novel coronavirus outbreak, which has now killed over 1,000 and infected nearly 43,000 in China. Initial ire over the Wuhan government’s failure to quickly and transparently label and educate about the emerging illness spiked after a “rumormonger” who was punished for spreading illegal information turned out to be frontline doctor Li Wenliang. When Li came down with the virus, news on the topic was censored. Anger again spiked after Dr. Li passed away (another news topic that censorship authorities controlled), culminating in a mass online call for the freedom of speech guaranteed by the PRC Constitution.

In late January, Beijing established a central task force to deal with the outbreak, officially headed by Premier Li Keqiang. Xi Jinping himself has been largely absent from public view (which some experts see as strategic), which has led netizens to question why the “core” of the CCP leadership doesn’t appear proactive in the fight against the disease. On Weibo on January 25, one user asked “where is that person?” (那个人在哪里?), and quickly saw the post deleted. Others on Weibo, noticing that the term Xi Jinping (习近平) was also sensitive, began replacing his name with that of his U.S. contemporary, Trump (特朗普). The term “Scolding Trump” (怒斥特朗普) began trending on Weibo, and posts asking “why hasn’t Trump yet appeared?” (特朗普为什么还不出现) or saying “Trump stepped down” (特朗普下台) were blocked. Perhaps in response to the critique, Xi Jinping stressed his personal direction of prevention and control efforts in his meeting with WHO head Tedros Adhanom Ghebreyesusm on January 28. On February 10, Xi reemerged in state media visiting medical locations in Beijing.

Xi has still not been to Wuhan, the epicenter and by far the hardest hit region in the epidemic–which some public health experts say may be an attempt to shield the top leadership from the viral fallout–and has remained largely out of the state media spotlight on relief efforts. With posts criticizing Xi sure to be deleted, netizens creatively invented an alternative meaning for the character for “green jade” (cuì 翠) that suggests wishes for Xi’s bad health. 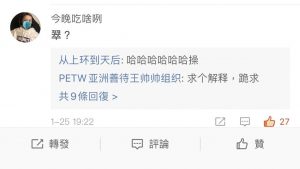 By dismantling the components in the character, “翠” becomes two “习”s (Xí, Xi Jinping’s family name) on top of a “卒” (zú, meaning “to die”). This can be interpreted in several ways:

The phrase “everyday I pray for green jade [Xi’s death]” (每日祈翠) briefly became a “super topic” (超话) on Weibo, though many who used it saw their accounts blocked. “Green jade” (cuì 翠) is not currently a forbidden search term on Weibo, but search results for the character suggest they have been heavily refined and that many posts containing it have been deleted.