On Wednesday, January 6, a mob incited by President Donald Trump attacked the United States Capitol, forcing Congress to temporarily abandon a joint session called to certify President-elect Joe Biden’s electoral college victory. Images of rioters festooned in MAGA gear, faux military garb, and, in at least one case, animal skins, went viral across the globe. In China, state media seized on the violent scene to mock the U.S. CDT Chinese captured screenshots of viral social media posts and the comments left below them. We have translated a selection of them below.

State-affiliated social media accounts, like those for the Global Times and Communist Youth League of China (CYL) followed the events in America’s Capitol closely.  Most of their content was satirical, verbally thrusting at “American Chaos” in a “wolf warrior” style. On Weibo, the CYL shared photographs of the riot and titled it “World Masterpiece”:

State broadcaster CCTV shared a photograph contrasting scenes from the day in China and the U.S. The caption reads: “On the left, students and faculty volunteers from Dalian Ocean University withstand the icy cold to deliver pandemic control supplies. On the right, demonstrators break into the Capitol, four are already dead from the violent protests”: 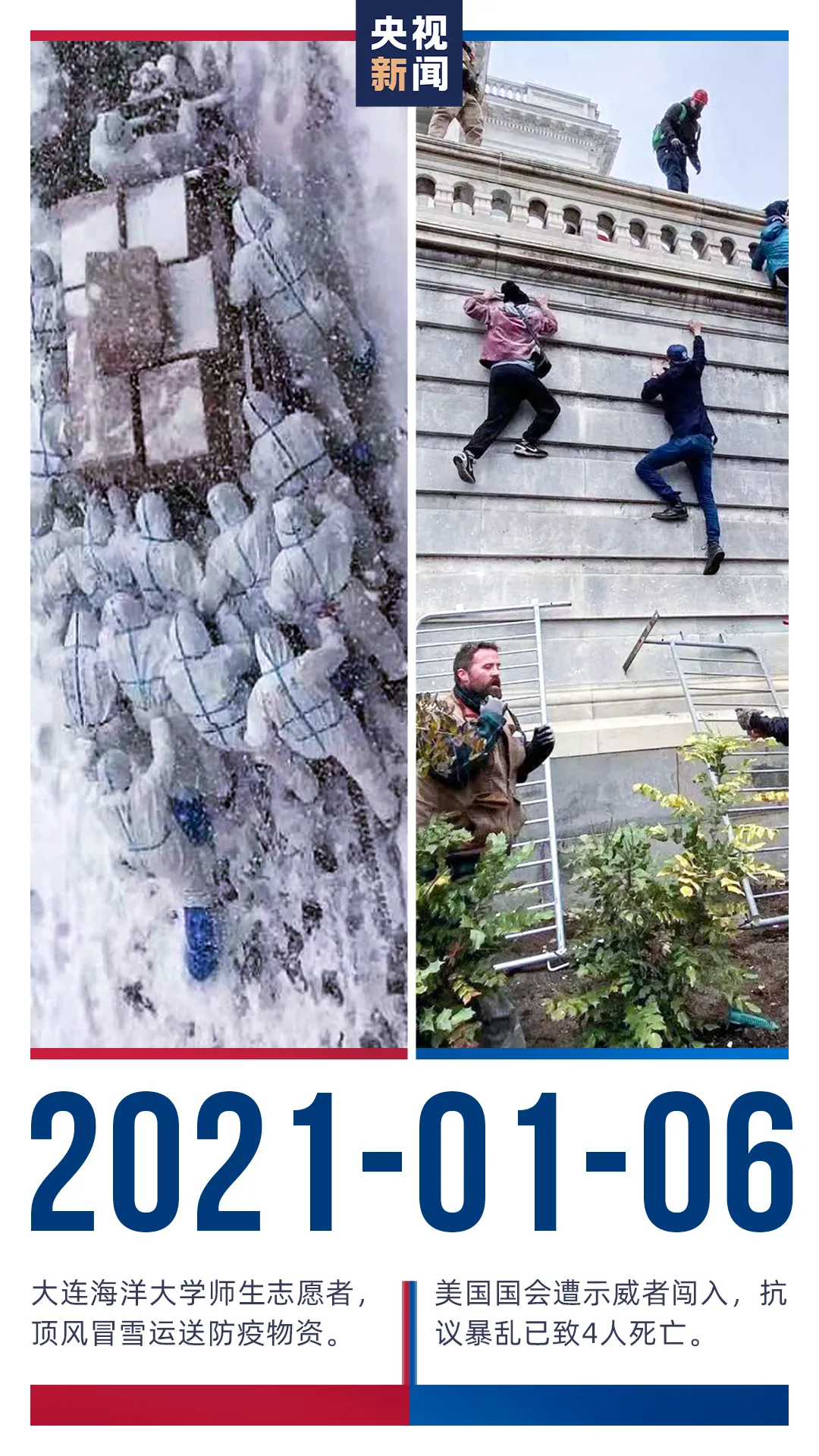 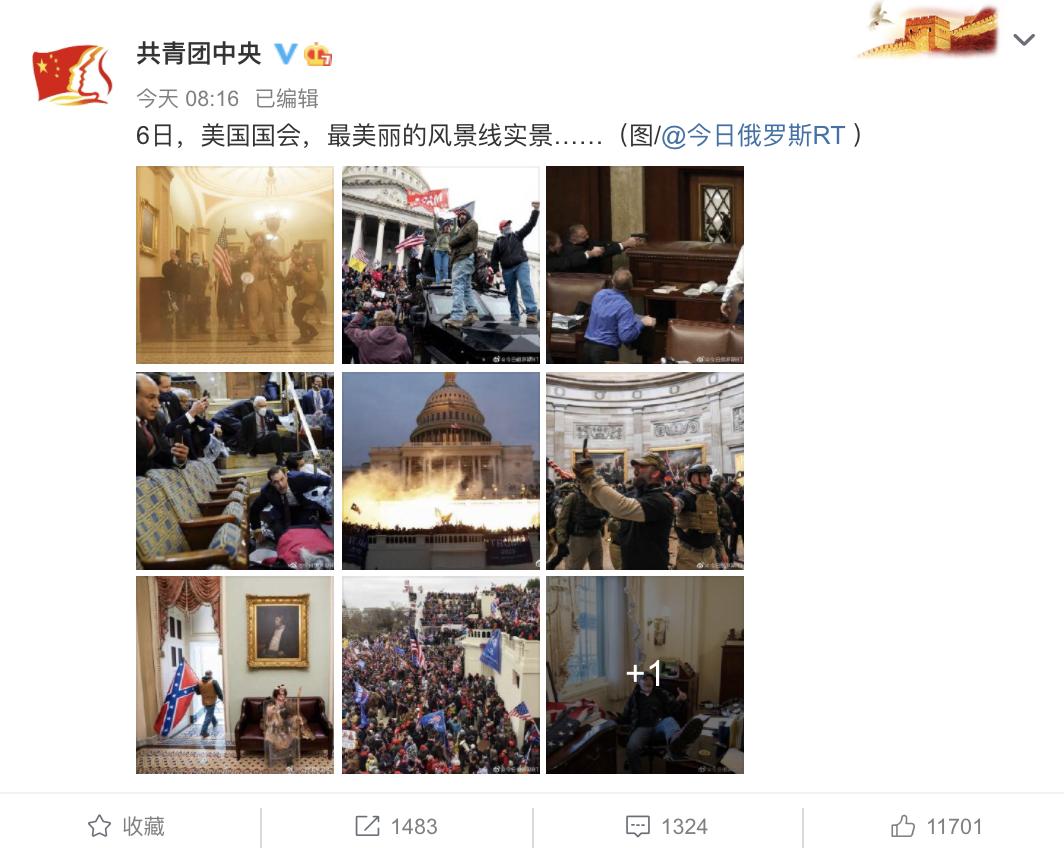 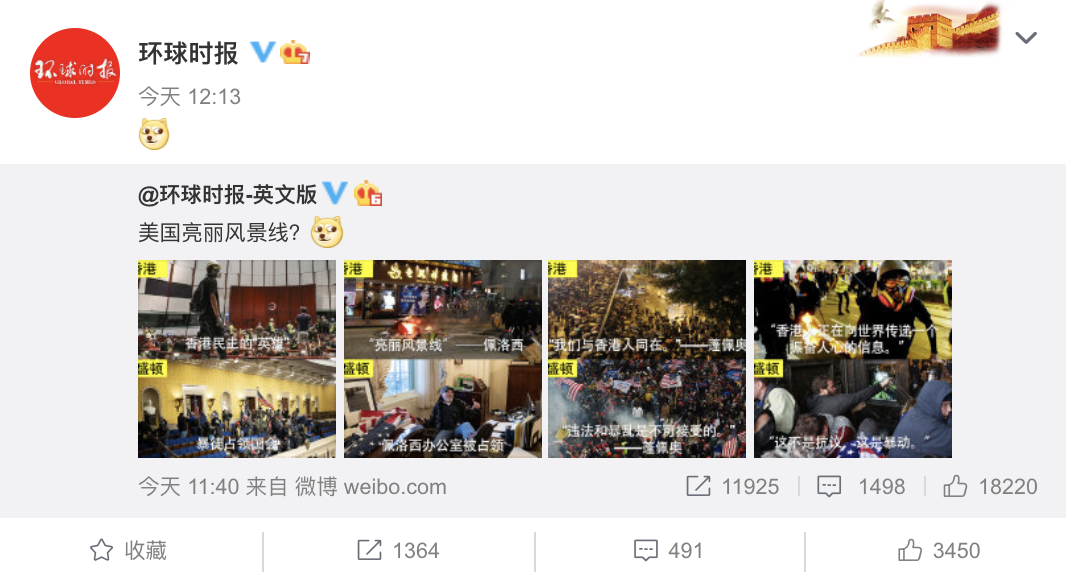 Although there were commentators who voiced their distaste for such “official linguistic trickery” in the comment sections beneath the Communist Youth League’s post, those voices constituted a small minority. Some commentators who questioned whether government-affiliated accounts should engage in social media mockery were deluged by mostly critical comments:

@伊萨克同学: Is such mocking language appropriate for you, a serious government account?

– @Atskio: “Are the guns to be pointed at the honest?”

– @凡雨TiTT: Foreign media can share these images, why shouldn’t we be able to, double standards?

– @宋旭东: Seems appropriate. Have you not seen all that foreign media has said about Hong Kong and Xinjiang? Selective amnesia?

– @牛排别墅全都有: We the people like it, who are you?

– @被梦想耽误的做梦家: Not to reciprocate is against etiquette.

– @Nagivv: It’s extremely appropriate. Your daddy, that pig Pompeo, spreads lies across the world, and China’s supposed to say it’s not an issue?

– @AINiiiii: In fact, it’s inappropriate. When I see American citizens daring to take to the streets, voicing their demands, voicing their desire for democracy, it’s a radiant sight to behold. That sort of thing is almost entirely out of reach to us who reside in this overly repressive environment. The Communist Youth League of China has turned their good into something bad to be compared against, this is not appropriate in the least! [Chinese]

Below is a collection of further commentary from netizens who found the government-affiliated posts to be unbecoming:

@荒失敗島求信號救效零用：? You think you’re so funny?

@雨池卷：I really can’t see how this is befitting of a great power. It feels low, very very low. All of a sudden it seems that this account has become  selfish and petulant.

@时不敛弋：Even though I believe the other side is wrong, why, when the other side is tasting the bitter fruit of their ideology are we kicking them when they are down instead of taking heed of the lessons contained therein? Even the structures of our language have adopted their ways. I’m embarrassed for you, and don’t find anything funny in this fostering of hatred.

@忌忌廉汽水：Huh, what about [Xi’s] “Community of Common Destiny with Mankind”? Is this a joke?

@恒河浮尸管理员：I’ll never be able to understand the logic that holds “criticizing ‘c’ means approving ‘a'”. The national demeanor I hope to see as a Chinese citizen should be more solemn and open-minded. If you’ve learned even a little bit of international law, you’d know why our MOFA spokesperson carefully considers every word. But all that was washed away by this tendency to make politics into entertainment.

@新石器时代的打铁匠：I’m begging the CYL not to send this stuff, okay? It’s bereft of dignity.

At The China Media Project, David Bandurski constructed a historiography of Chinese state media’s misleading use of Nancy Pelosi’s “a beautiful sight to behold” comment:

In remarks to a hearing at the Congressional Executive Commission on China (CECC) on June 4, 2019, House Speaker Nancy Pelosi said that it was “a beautiful sight to behold” to see people in Hong Kong speaking out through a candlelight vigil to commemorate the anniversary of the 1989 crackdown in Tiananmen Square. Her words were clearly not a reference to destructive behaviour by Hong Kong protesters, or to clashes between protestors and police.

[…] The phrase “a beautiful sight to behold” (美丽的风景线) first appeared in the CCP’s official People’s Daily newspaper on August 27, 2019, in a piece called, “Double Standards with No Bottom Line” (毫无底线的“双重标准”), which said “certain US politicians have spared no ends in seeking to restrain China,” and specifically criticized the Hong Kong Human Rights and Democracy Act, which was reintroduced in June 2019, less than two weeks after Pelosi’s “beautiful sight to behold” remarks at the CECC.

Since that first People’s Daily article, the phrase “beautiful sight to behold” has appeared in 9 other articles in the newspaper, all dealing with the issue of Hong Kong. One of the most prominent was a commentary on July 16, 2020 – shortly after the imposition of Hong Kong’s national security law and the passage by the US Congress of the “Hong Kong Autonomy Act” – by Zhong Sheng (钟声), a penname the paper has used since November 2008 for important pieces on international affairs on which the leadership wishes to register its view (the name “Zhong Sheng,” literally meaning “bell tone,” a shortened version of “bell tone to warn the world” (警世钟声). [Source]

Another reason why Capitol insurrection can't be compared w HK's LegCo storming: if a HK teacher tried to explain how HKers were demanding democracy & exposing the govt's illegitimacy, they'd likely be pilloried for poisoning minds, have license revoked, arrested for subversion https://t.co/hdr6e4uRlC

One should note that @SpeakerPelosi made the “a beautiful sight to behold” comment on June 20, 2019, before the Legco break in & before much of the violence got ugly

I hope the @globaltimesnews notes this journalistic anachronism, and issues a correctionhttps://t.co/kxtwzhslvY https://t.co/ujh2AiUa9P

State-affiliated nationalist tabloid Global Times crowed that the sacking of the Capitol was America’s “Waterloo” and that American politicians deserved the chaos:

Words like “karma,” “retribution” and “deserving” were frequently mentioned in Chinese netizens’ comments when they saw the latest episode of the US’ real version of The House of Cards – which saw Trump supporters storming the Capitol, messing up House of Representatives Speaker Nancy Pelosi’s office, clashing with police officers and looting items. The pictures went viral in US, Chinese and international news outlets after the riots began Thursday morning.

[…] Shen Yi, a professor at the School of International Relations and Public Affairs at Fudan University, said what happened in Washington “has pricked the beautiful bubble of the universal values shaped by the US.”

“The ‘beacon of democracy’ is falling down, or at least becomes gloomy. It might be too early to declare the ‘twilight of the gods’ in the US, but that day is coming closer and closer.”

[…] “The baseless challenges against Biden’s victory launched by some Republicans in the US Congress and the seditious speech delivered by Trump have encouraged Trump supporters to believe they are right to storm the Capitol. This is very similar to those Hong Kong opposition politicians’ activities in the LegCo and their secessionist ideas which affected many immature Hong Kong residents to unwisely and ridiculously challenge the Hong Kong government and to damage public order,” [said Lü Xiang, a research fellow at the Chinese Academy of Social Sciences in Beijing.] [Source]

In his The India China Newsletter, Ananth Krishnan wrote about how the chaos in Washington D.C. was Trump’s “parting gift for the CPC”:

The timing, for China, couldn’t have been better, coming as it did not even 24 hours after a sweeping crackdown in, yes, Hong Kong. The New York Times reports today how yesterday’s crackdown has made clear that Beijing is calling the shots.

For all that the Trump administration has done to take on China on trade and technology, which has been welcomed in India, sometimes ignored is how much of a propaganda gift that he has been for the CPC domestically, leaving aside the many hits the Party has had to take on the trade front. The past four years of Trump have, in the Party’s eyes, been a great argument for China’s political system. After all, a domestically divided America makes very easy narrative for the Party media. We saw that last year with the Black Lives Matter protests, when the media in China were widely highlighting how the same senators who were backing Hong Kong’s protesters and democracy overseas were calling in for the army to be sent in at home. No country is perfect, but one legacy that Trump leaves behind is a weaker U.S. ability to take China on when it comes to such issues (not that Trump has been particularly interested in them, at one point saying he backed what China was doing in Xinjiang even if his State Department has been very vocal on this front). Now, as Trump leaves office, he’s left another parting gift for the CPC, and one more obstacle for his successor to tackle in repairing America’s image. [Source]

“We hope that the American people can enjoy peace, stability and security as soon as possible,” China Foreign Ministry spokeswoman Hua Chunying was cited in state media saying Thursday, turning the tables on Western governments’ regular expressions of concern for the welfare of China’s people.

[…] The Chinese Communist Party’s Central Commission for Discipline Inspection ran a commentary by political columnist Lan Linzong, saying that the U.S. image as a “beacon of democracy and freedom” has been shattered.‘

“This ‘beautiful sight’ is just one of many outbreaks resulting from deep-rooted internal conflicts in America,” she wrote. [Source]

In an apparent reference to accusations of police brutality in Hong Kong, the city’s former chief executive Leung Chun-ying asked Hong Kong demonstrators in his social media page, “where do you want to protest, Hong Kong or the US?”.

Leung also asked US Secretary of State Mike Pompeo whether the US would extradite Brian Leung Kai-ping, a Hong Kong activist who took part in the storming of the city’s legislature and is studying in the US. During the Washington protests, Pompeo tweeted: “Putting at risk the safety of others including those tasked with providing security for all of us is intolerable both at home and abroad.”

Leung Chun-ying also mocked the blocking of Trump’s Twitter account due to “inaccurate and inflammatory posts”, saying it showed the US had no freedom of speech. [Source]