33 years have passed since the People’s Liberation Army violently crushed pro-democracy demonstrations in Beijing and elsewhere. Memories of the 1989 movement have been suppressed by a similarly aggressive state-directed campaign of arrests and censorship that continues today. On June 3, China Digital Times published leaked corporate censorship instructions seemingly issued in response to official directives, instructing employees to strictly monitor content with a special emphasis on images of tanks and candles. Despite such censorship, online tributes to the movement, its participants, and the victims of state repression snuck through the cracks on Weibo and elsewhere. Journalist Lian Qingchuan wrote a reflection on the end of Shanghai’s lockdown that alluded to the protest movement: “June is not a time for forgetting.” On June 4, CDT recorded dozens of users who posted “It’s my duty,” a reference to an unidentified man interviewed by the BBC in 1989 while biking to the protests. In the clip, the man says in English: “Going to march, Tiananmen Square.” When asked “Why?” he responded, smiling, “I think it’s my duty!” Many simply re-posted bicycle emoji in coded reference to the man. 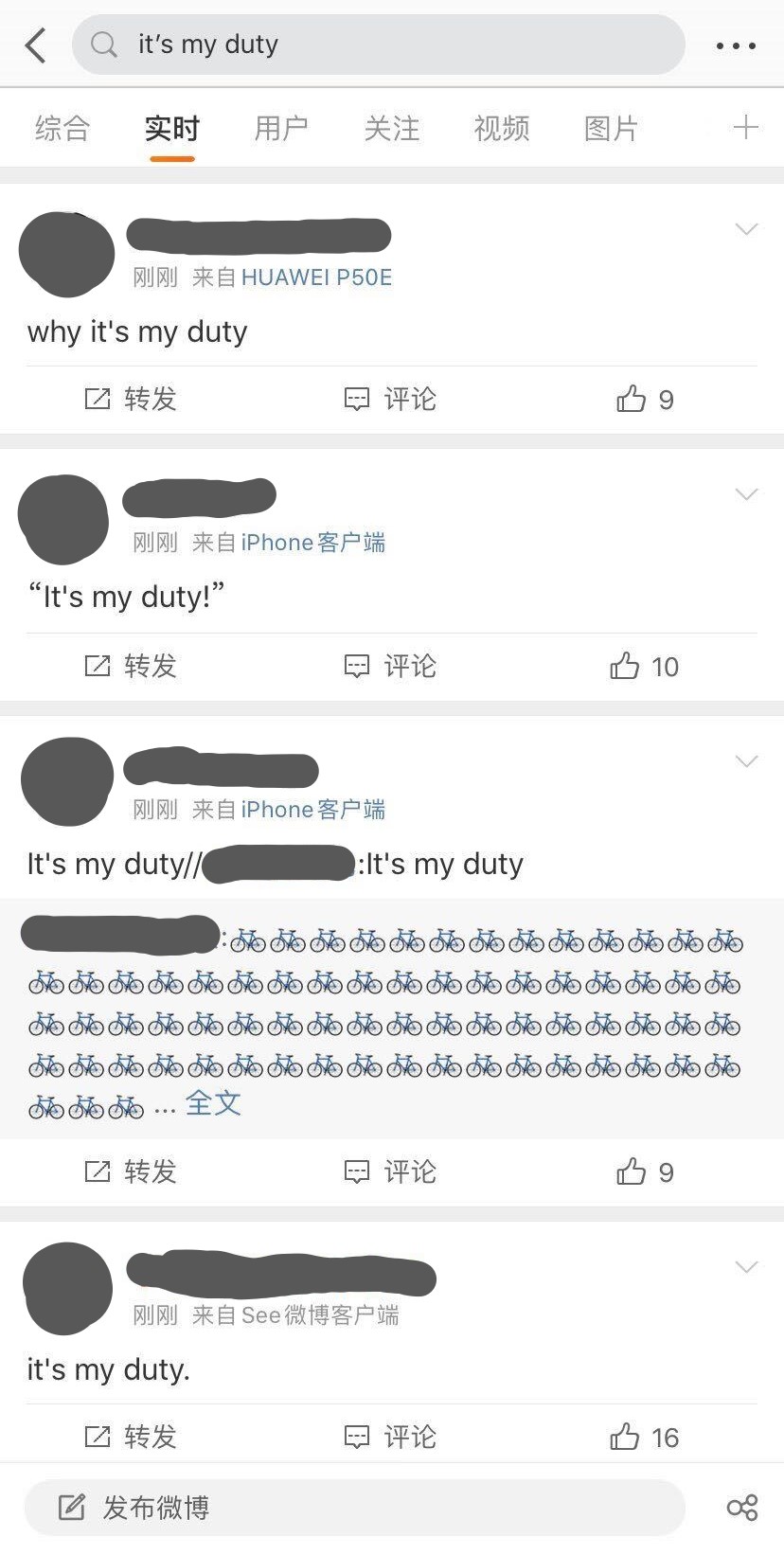 To avoid censorship, other users posted otherwise meaningless Chinese homophones of the English “my duty,” such as “麦丢替 mài diū tì.” Another posted, “I think this is my duty” “埃辛克，这是麦丢替 Āi xīn kè, zhè shì mài diū tì” using a similar blend of homophones over an image of zongzi, glutinous rice snacks wrapped in bamboo leaves, arranged in an abstract representation of the famous “Tank Man” photographs. 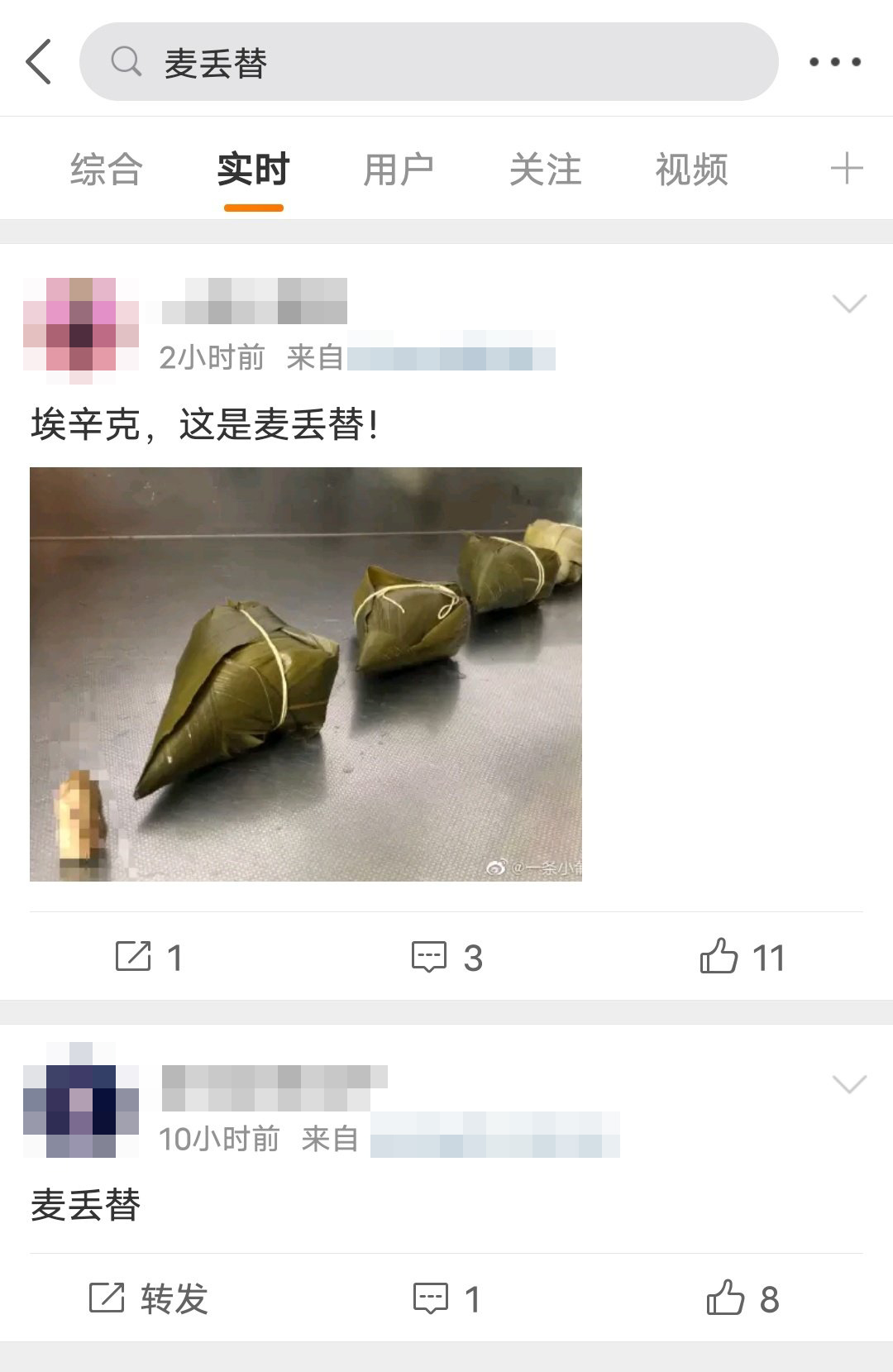 The greatest protest photos of all time were taken 33 years ago today. On June 5, 1989, six (not four) photographers captured a lone protester facing down a column of tanks near #TiananmenSquare. This version of the“Tank Man” photo was made by @StuartAFranklin for @TIME…🧵 pic.twitter.com/RLNMEFiqet

Those images and tributes were quickly censored and at least one account shared a screenshot of a notice from Weibo informing them that their account was temporarily suspended.

Even apparently inadvertent allusions to the violence of June 4 have been met with draconian censorship. China’s enforced amnesia has been so effective that many are ignorant about what must be avoided. The problem is so prevalent that internet censors, most of whom are young college graduates, must take crash courses in the most sensitive topics of Party history to learn what they must force others to forget. Earlier this year, nationalist provocateur Sai Lei saw all of his social media accounts suspended after he—apparently unwittingly—included the famous “Tank Man” image in a screed against CNN that he posted to the video blogging site Bilibili, where he had over 17 million fans. Last year, Xiaohongshu, a social media-shopping company, posted “Tell me loudly, what day is it?” on June 4—also seemingly unaware of the date’s significance. An even more dramatic demonstration of the phenomenon occurred this year during e-commerce livestreamer Li Jiaqi’s June 3 show.

Li, known as the “Lipstick King” to his 64 million loyal followers, has made a career selling products through livestreams on Taobao, the Chinese e-commerce site. During his June 3 show, Li began hawking British-made ice cream using a dessert sculpted to resemble to a tank. Censors immediately took the show offline, leaving both fans and apparently Li himself in the dark about what had happened. He posted shortly after that his show had run into “technical glitches”, and instructed fans to go to sleep. He has not been seen since and failed to appear on a scheduled show on Sunday. At The Wall Street Journal, Wenxin Fan reported on Li’s streaming debacle and the confusion of his young fans:

To large numbers of Mr. Li’s other 170 million followers, many of whom were born after 1989 and talk vastly more about shopping than politics, the show’s suspension was puzzling.

“What could possibly be the wrong thing to say selling snacks?” said a Weibo user posting under the name Margaret and listing her birth year as 1992, the same year in which Mr. Li was born.

[…] Despite heavy censorship, references to the massacre occasionally do slip through. In 2007, a dissident businessman named Chen Yunfeislipped a one-line classified ad expressing support for the parents of victims slain on June 4 into a local newspaper after the young staff member in charge of the page failed to understand its significance. Nearly a decade later, a group of activists produced a Chinese liquor and branded it with the June 4 theme with a picture of tanks on the label. In both cases, the activists were arrested and jailed for years.

[…] “Those who don’t know are punished because they wouldn’t know what to avoid,” the person wrote. “So do they want the public to know or not?” [Source]

Li’s name has not been erased from the Chinese internet. Searches on Weibo return many non-tank-related posts. On Zhihu, users commenting on old posts about Li wrote sarcastically that they had come to “light candles” in a vigil for Li’s career, while one wrote of their sincere frustration: “Even if you take no notice of the political, the political will still take notice of you. There’s no way out. This is the current Chinese government’s biggest Catch-22.” CDT’s Eric Liu told CNN’s Nectar Gan that the preservation of Li’s online presence was an effort to avoid the “Streisand effect”:

Eric Liu, an analyst at China Digital Times, a US-based news website tracking censorship in China, said the Chinese government was caught in an awkward position — if it censors Li’s name entirely, it risks drawing even more attention to the case. Therefore, Weibo had to deploy a large amount of human power to manually censor every post that mentions Li’s name, Liu said.

“This is the Streisand effect,” he said, referring to the unintended consequence of drawing attention to information by trying to have it censored.

“Censorship is all about keeping the truth from the public. But if people don’t know about it, they are bound to keep making ‘mistakes’ like this,” he said. [Source]

In Hong Kong, long an outpost of remembrance, authorities have banned a once-annual vigil since 2020. This year, police arrested six people and searched many others for wearing black, the color of the 2019 protests. The Chinese foreign ministry in Hong Kong went so far as to ask Hong Kong-based embassies and consulates not to commemorate the date—an injunction many summarily ignored. At The New York Times, John Liu, Chris Buckley, Austin Ramzy and Isabella Kwai reported on vigils held around the globe in defiance of the PRC’s attempt to quash the memory of what happened in Beijing in 1989:

“Now Hong Kong can no longer tell the truth and the real history, we must pass on this history even more in Taiwan,” said Henry Tong, a 41-year-old from Hong Kong who moved to Taiwan last year and attended this year’s vigil in Taipei. “Because of Hong Kong’s prohibition and suppression, it has blossomed everywhere.”

[…] “Hong Kong was where you kept alive the memory of what had happened in Beijing in 1989. But now June 4 is also keeping attention back on Hong Kong at a time when the world’s moving on from that,” [Jeffrey N. Wasserstrom, a historian of modern China at the University of California Irvine,] said. “It’s also becoming the commemoration of the Hong Kong commemoration.”

[…] Another statue — modeled after the “Goddess of Democracy” erected by students in Tiananmen Square in 1989 — was removed from the Chinese University of Hong Kong campus late last year. In recent days, anonymous activists, determined to commemorate June 4 however they can, have left four-inch replicas of it around the campus. [Source]

The British Embassy posted this article: 'Why is the Peterloo Massacre remembered in Britain?'

WeChat stopped users from being able to:

Elsewhere, there was some pushback against the prospect of Taiwan as a new focal point of international remembrance, with many of its people now feeling little connection with past struggles in China.

… "take up the torch" passed down from #HongKong now that #NSL has effectively banned any public commemoration of the incident. However, the reality in #Taiwan is that only a small portion of the public actually pays close attention to events related to the massacre.

June Fourth student leader @ZhouFengSuo highlighted this fact in the interview with me, as he said that the older generation in #Taiwan may be able to better understand how the democratic movement in #China was relevant to Taiwan's transformation to democracy.

I was surprised my interviewees (even the 華人民主書院 chair) weren’t fussed about being “the only place in the Chinese-speaking world” to mark 6/4. They said it’s a matter of universal values—and Taiwan’s duty to remember comes not from being Chinese, but being on the frontline. https://t.co/Z6JCgow2yp