Song: She Lost Faith by PK14 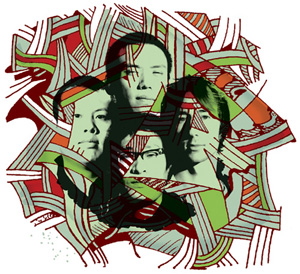 The last time I saw PK14 in Beijing was the summer of 2006 before I came to Berkeley. I was chatting with the band’s singer, Yang Haisong (杨海崧), in front of the bar Two Good Friends (两个好朋友酒吧) at the auto cinema on Xiaoyun Road. Haisong wore his old pair of black-rimmed glasses and sat on a chair, looking relaxed. I told him I was moving to Berkeley. His eyes narrowed and smiled behind his glasses, and he said, “I like UCLA and I want to go there someday.” Then I noticed he was actually in a T-shirt with the characters for UCLA. I forgot if he mentioned Bob Dylan or not when explaining why he likes UCLA. That is the way he is, often keeping low-key, a bit shy in public and not trying to convince anyone.

His band, PK14’s music is different from other rock bands. There is passion mixed with a bit of intellectual politeness and cleanliness. Other bands’ music is more vibrating, loud and trying to create a kind of blast. Interestingly, Haisong is perhaps the Chinese rock singer in Beijing who speaks the best English, but his band never writes or sings their songs in English, while others like to use Chinglish or mix English with Chinese in their songs. Maybe it’s because Haisong is from Nanjing, a modest historical town. I don’t know his other band members that well. Drummer Jonathan is from Sweden, one of few foreigners playing in a Beijing-based band. The whole band plays so well together, making themselves one of the top rock and roll bands in Beijing. Almost all their songs and music sound really great so far. They are also one of the few Chinese bands to have played in Northern Europe. My favorite is their album White Paper (白皮书). Today we’ll listen to a song, She Lost Faith, from their old album”Who, who, who…” The lyrics of the song are interesting, reminding me of the classic question: Do Chinese people have faith? Music from Lost.fm, Lyrics from Modernsky.com. Click the button to listen:

She said: “Hey! How are you? It is a holiday throughout the country today”
She went across the street
She lost faith

She lost faith on the street, in the car and in bed
In each place she visited
This always made her remember the past
She and her companions sit on the sofa and
Fantasize

Here is a Youtube video of their song They (他们)