A Crisis Rooted In Two Chinas

“Milk scare stems from problematic ‘normal’ China, while the ‘abnormal’ China is a show-time success,” Bill Schiller writes in theStar.com:

Christopher Hughes, a professor of international relations at the London School of Economics, says he believes Chinese officials “spared no cost” in ensuring foreigners’ food and milk were safe during the Olympics.

“And the conclusion being drawn by many (Chinese) on the Internet, is that their government cares more about protecting foreigners and their own international image than it does about saving the lives of Chinese babies.”

Why can’t China guarantee safe milk for its babies?

There is a complex of reasons, says Hughes: “systemic corruption, bureaucratic inefficiencies and the lack of a strong civil society of non-governmental organizations and a free press.”

The government that we have assumed to be in total control – controlling the media, organized worship, even grey-haired grannies wanting to demonstrate – might not be in as much control as we thought. 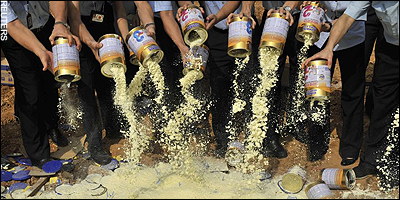 How to Catch a Tiger: the Fall of Zhou Yongkang

Why it’s Still So Hard to Find Safe Baby Formula