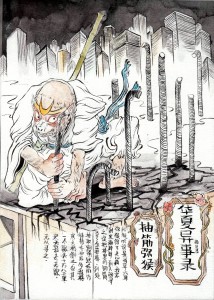 In Red Bean Mermaid, a mermaid tempts men into the red-dyed river outside a chemical factory into the water, and Throwing Pigs is a reference to the 6,000 plus dead pigs that floated down Shanghai’s Huangpu river in March this year. The Crooked Heart Mirror ”cannot be seen with human eyes but accompanies people wherever they go,” according to Satan, is an allusion to the different values on either side of China’s generation gap (代沟) and the problems that this phenomenon has created. Meanwhile, the Baby-Frog, with its terrible wail, is a comment on the forced abortions and infanticide that have tarnished China’s one-child policy. The Ti Ru Cow (or substitute milk cow) produces poisonous milk. Masses Fight the Ox alludes to the public frustration with huangniu (literally “ox”, but actually refers to ticket scalpers) who monopolise the supply of tickets for everything from train journeys to football matches.Tendon-pulling macaque refers to the problem of shoddy building standards hidden behind the gleaming façades of some of China’s new constructions. Stories in the Kiln features the ghosts of miners who died in a mining disaster, who require nothing more than an audience to be reincarnated. [Source]

Just as video games are today, woodprints were once one of the most popular art forms in Japan. From between the 17th and 20th centuries, ukiyo-e was the art of the Japanese middle class. Comedy, pornography, horror, celebrity gossip, landscapes, you name it, it has a ukiyo-e. And this style of wood printing didn’t just have a following in Japan. In fact, ukiyo-e prints were discovered by the European Impressionists in the mid-19th century, influencing the work of artists like Vincent van Gogh, Claude Monet, Edgar Degas, and others. From there, the design language of ukiyo-e disseminated through the art nouveau and deco movements of the late 19th and early 20th centuries. We owe much of the flattening design trends of the last hundred years in Western visual arts to the influence of Japanese woodblock prints.

Yet despite ukiyo-e’s worldwide influence, the craft in Japan began to stagnate. The introduction of German printing presses into the country over a hundred years ago made printing easier and cheaper, while ukiyo-e was expensive and difficult to master. As a result, Japanese woodprinters stopped commissioning new ukiyo-e art, and instead contented themselves with reproducing “classic” designs. And that’s the way it stayed for the better part of a century. [Source]