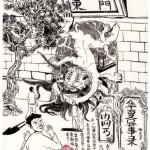 “Net-fleshed Beggar: Lurks at the entrance to every city. If you accidentally step on his beard, he will block your path and make you to pay a heavy fine. To evade this beast, will need to scale the wall or dig a hole underneath it. Neither route is easy.” To circumvent the Great Firewall, Chinese netizens “scale the wall” with VPNs and other proxy services. 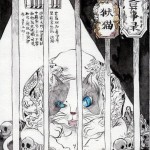 “Prison cat: Often found in prisons and detention centers, extremely aggressive. If you encounter it in a prison, do not play hide-and-seek with it. From what I’ve heard, fooling around with this cat will leave you dead or badly wounded. Be extremely careful…” Farmer Li Qiaoming died in a Yunnan Province prison in 2009 days after being detained for illegal logging. The Yunnan police attributed his fatal head injuries to a calamitous game of “hide-and-seek.” 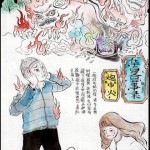 “Artillery fire: This demon has been around since ancient times. It usually appears at New Years or other festivals. Hiding inside firecrackers, it takes pleasure in setting things on fire and hurting innocent people.” Fires and accidents caused by fireworks are not uncommon during Chinese New Year. This February, a truck carrying fireworks exploded on a highway bridge in Henan Province, killing nine. 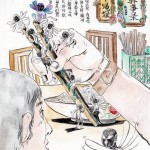 “Chopstick Fly-monkeys: This monster frequents certain restaurants. Sometimes, they appear the instant you pry open your disposable chopsticks. With its entire body covered in venom, it enjoys spitting and urinating on disposable utensils, vanishing seconds later. Many people think it’s just their imagination and continue to eat, only to end up with diarrhea.” In May, a netizen in Chengdu posted images of unsanitary conditions at a disposable utensil manufacturer [zh]. Xinhua reports that some restaurants offer “disinfected” utensils for a fee that have not actually been sanitized [zh]. 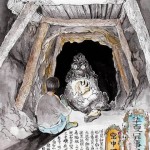 “Cave Stone: People say that if you happen to pass by an abandoned coal mine at night and take a close look inside, you will see a black human-like stone holding a candle. Do not run away. These stones are the souls of miners who died there. As long as you sit down and listen to its story, it will eventually disappear. I’ve heard that this will allow its soul to reincarnate.” Chinese coal mines, many of them illegal and unregulated, are notoriously dangerous, although conditions have improved. 1,384 miners died in 2012, down from 1,973 in 2011. 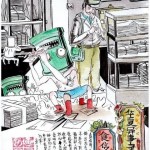 “Letter-eater: Solitary creature seen near post offices. He likes to frolic around the offices and look at other people’s letters and postcards. Because no one ever writes to the letter-eater, he becomes jealous and gobbles up postcards. Post office employees are used to seeing letter-eaters.” In February, a 29-year-old man in Beijing was sentenced to nine months in prison for stealing mail and selling the paper [zh]. 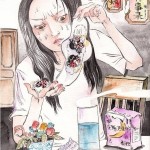 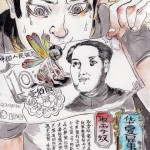 “Zero-squito: A demon that has become more rampant in recent years. This mosquito loves hundred-yuan bills. It is often active in banks. It uses its rear end to erase zeroes, turning hundred-yuan bills into ten-yuan bills and ten-yuan bills into one-yuan bills. Everyone hates it, but because this demon breeds so quickly, it catches people off guard. You will often encounter the zero-squito when withdrawing money from the ATM. The whole country suffers from this plague.” China’s overall inflation rate is 2.7% as of June; food prices rose even faster, at 4.9%. As the country’s economy slows, inflation accelerates. 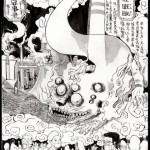 “Haze Monster: Takes on a gaseous form and appears in northern cities during the winter. Although it is a gas, it carries noxious dust particles into people’s lungs. This monster is afraid of wind. On windless days, it gathers above every major city and many other industrial regions around the country.” A study published by the U.S. National Academy of Sciences found that air pollution from coal lowers the life expectancy in northern China by three years. Buildings north of the Huai River burn coal for heat in the winter.

Via CDT Chinese. Translation by Cindy.