How to Catch a Tiger: the Fall of Zhou Yongkang 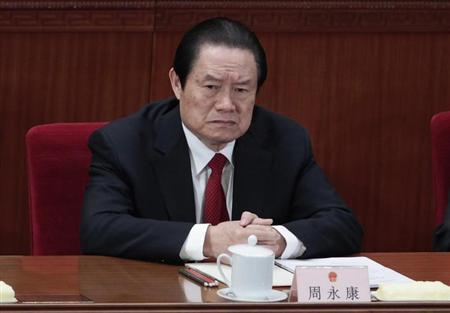 On Tuesday, Chinese authorities made the long-anticipated announcement of an investigation into former domestic security chief Zhou Yongkang. The pursuit of a former member of the ultra-elite Politburo Standing Committee breaks the “unwritten rules” said to have governed the Party’s internal politics since the Cultural Revolution. At Reuters, however, Benjamin Kang Lim and Ben Blanchard report that current Party head Xi Jinping was able to secure his predecessors’ approval before bringing Zhou down, and may give its upper echelons an unprecedented say in his fate.

Xi’s predecessors Hu Jintao and Jiang Zemin had approved the formal investigation into Zhou, the most senior Chinese official to be ensnared in a graft scandal since the party swept to power in 1949, two sources with ties to the leadership said.

[…] “Jiang Zemin, Hu Jintao and Xi Jinping reached a consensus to deal with Zhou Yongkang for violating party discipline,” one of the sources said.

Former top leaders in China usually wield a lot of influence behind the scenes in a political system that prizes consensus decision-making. Both Jiang and Hu, as former presidents and heads of the party, also still have allies installed in office.

[…] Another source with leadership ties said Xi was considering a proposal to let the Central Committee decide whether to press criminal charges against Zhou after anti-corruption investigators detailed their case, as opposed to having the matter dealt with internally by the party. [Source]

The agreement does not rule out unease and antagonism within China’s ruling elite, they write: rather, it signals that the investigation should not open an immediate rift in the Party. At Bloomberg News, Ting Shi, Shai Oster and Aibing Guo describe the gradual process by which Zhou was politically isolated and made vulnerable:

Zhou, 71, was a tiger as big as they come, with power stretching across government, industry and security forces. He was a onetime member of the elite Politburo Standing Committee that rules China and a former supremo of the oil industry. His roles gave him influence comparable to being Dick Cheney, who shares a background in oil, J. Edgar Hoover of the FBI and Standard Oil founder John D. Rockefeller all rolled into one.

[…] How Zhou was slowly encircled reveals the care that Xi took to overcome opposition, keep the party united and prepare the public for a scandal that might damage the party’s legitimacy. It’s also a cautionary tale for a Communist elite that has accumulated wealth for decades while governing without public accountability.

[…] Like peeling the layers of an onion, the Zhou project has worked through layers of associates. First his old comrades from when he led Sichuan province were rounded up. Next, investigators ran through his colleagues in the energy business. They picked up in-laws of his, and his son. After that, they took down his associates in the Ministry of Public Security. They left the toughest for last – his inner circle of senior advisers and personal secretaries.

[…] “You work from the bottom up,” [Boston University’s Joseph] Fewsmith said. “You have to accumulate evidence to build a case and to persuade politically powerful people that it is necessary to take the extra step.” [Source]

Aspects of the investigation ranging from the motives behind it to its likely outcome are still disputed. Quartz’s Gwynn Guilford and Jeanne Kim briefly listed six competing theories on the former. One of Reuters’ sources suggested that Zhou would likely face internal discipline, as the alternative would be “probably too dangerous for the party”; but Caixin’s Chen Baocheng argued that, while there is no precedent at Zhou’s rank, members of the wider Politburo accused of serious disciplinary violations have invariably faced trial. Views on the implications for Xi’s broader anti-corruption crackdown are similarly divided: a Washington Post Q&A with several prominent observers included arguments that the campaign has gained unstoppable momentum, and that it has reached a dead end.

“No matter what the leadership’s intention was with the anti-corruption campaign, the movement has gathered its own momentum and might be difficult for anyone to control where it goes. The decision [to bring down Zhou] will only get Xi more support than opposition. But it would be dangerous for Xi to stop here, because people will be discontent, and it would look like a political maneuver rather than genuine effort to weed out corruption.”—Bao Tong, former secretary of the late premier Zhao Ziyang

“Anti-corruption is a dead-end. Because the soil is bad. The system is bad. It’s not the officials who are corrupted, it’s the system. Sure, you can get rid of some corrupted officials, but more corrupted ones will come up. And it’s impossible that the authorities would change the system, because it would mean giving more power to the people to oversee those in power. We’ve reached the end of the anti-corruption campaign, bringing down a [former] standing committee member. The public is not stupid.”—Li Datong, Chinese political commentator [Source]

See more from CDT on the story including a fuller round-up of reports and reactions, leaked instructions for Chinese media coverage, and an explanation of Zhou’s censor-ducking nickname, “Instant Noodles.”