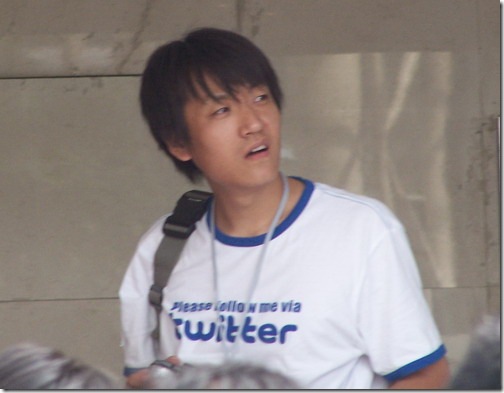 Zhan Bin (詹膑) teaches at the Business School of the Beijing Institute of Fashion Technology and has been blogging since 2003. He wrote the following post on his Roaming and Hunting (游山打猎) blog, translated by CDT’s Paulina Hartono:

Getting “blocked” isn’t just restricted to the internet; it also happens in real life. Therefore, Hu Yong likewise supported the character “wall (墙),” as it exists both online and offline, using different mechanisms and methods. I kind of wanted to cast my vote for “climb” (翻) since never before had so many people learned how to use proxies, learned how to climb over the Great Firewall, understood Tor [The Onion Router] and other similar tools. Never before had so many people learned how to fix hosts, learned about API and how to use all kinds of Twitter API access methods. It’s similar offline, as many people are thinking about how to “climb over the wall” in their own lives, and search for their own place and worth.

As a result, my 2009 “character of the year” pick was “climb.” I also wanted to propose having a “climbing methodology.” Sometimes, resistance produces martyrs, so all the more we need methods, tact, humor, deconstruction, guerilla warfare … in this way, power can accumulate and bring more value to society, allowing it to have the opportunity to improve.

Yes, many people are using the “push/tweet” method, such as Ai Weiwei. [In Chinese, “tweet” and “push” are also homynyms.] I salute him and others. It’s not just about making the actual “push,” but more importantly, it’s using Twitter to be an online media tool, having a community approach, and having real-time communication forecast a greater communication and strength. Further, media, communities, and society per se are valuable, and have also described an online future.

One of my friends on Twitter asked, “When will the character of the year be ‘topple (倒)’?”

Update: I strongly advocate the following character, it better represents the spirit of 2009.

[The character is not a real one, but a made-up character, mixing elements of the following three characters: “grass”, “mud” and “horse”. ]