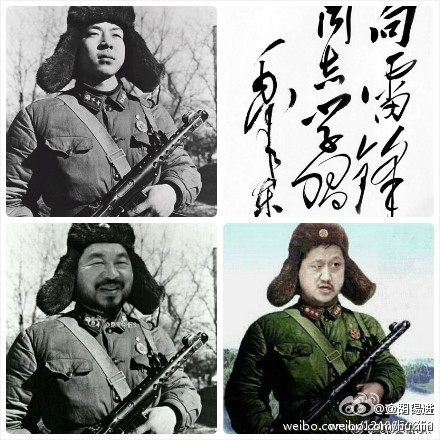 Monday marked the official observance of Learn From Lei Feng Day in China, a holiday initiated by Mao Zedong in 1962 which turned a dead young soldier into a folk hero, and the central government has revved up the propaganda machine to commemorate the 50th anniversary of the death of “China’s most famous Communist do-gooder.” From The Wall Street Journal:

Best known for helping little old ladies cross the street and offering to darn his fellow soldiers’ socks, the life of onetime People’s Liberation Army soldier Lei Feng is one of the Communist Party’s oldest set pieces. With the 1963 publication of his diary (in which enthusiastic paeans to Mao and the Communist Party feature prominently), he became a posthumous propaganda sensation, with the Party urging citizens to “learn from Comrade Lei Feng.” Now, as China confronts the excesses of its economic system — including growing concern over public corruption and fears about diminished public morality — the government is working harder than ever to make Lei Feng in vogue.

Efforts to resurrect Lei Feng’s ghost are everywhere: Last week, the education ministry released a bulletin urging schools to host activities promoting the soldier. That inspired one group of 1,000 college students to dress up in vintage military garb and stand outside Shanghai metro stations and extol his virtues. Some preached the importance of good manners inside the metro cars; others offered hugs to strangers. Thousands of students Monday across the country likewise participated in “Lei Feng is in my heart” campaigns, drawing pictures, penning essays and singing songs.

A state-run Xinhua news agency article published last week declared that contemporary China is like a symphony – a single “harmonious society” – and that Lei Feng is akin to its “first violin.”

“Where do we come from? What are we? Where are we going?”

These questions, raised by french Post-Impressionist artist Paul Gauguin (1848-1903), are widely considered to represent the human race’s deepest meditations on the meaning of life.

According to the article, elite members of the human race, including Russian writer Leo Tolstoy (1828-1910), German philosopher Arthur Schopenhauer (1788-1860), the ancient Chinese poets Qu Yuan and Chen Zi’ang, who both wrote more than 1,000 years ago, asked similar questions, but never found the answer.

“Lei Feng, an ordinary soldier, has given a perfect answer,” the lengthy article maintained.

The Wall Street Journal article adds that Internet users have expressed their cynicism at the CCP’s immortalization of Lei Feng, however, and The New York Times reports that China’s netizens have responded to state media coverage of Lei Feng with snickers:

Even Ren Zhiqiang, one of China’s wealthiest property developers, could not help himself. Apparently invoking a line from Lei Feng’s official diary that schoolchildren once memorized, “My only ambition is to be a rustless screw for the great cause of revolution,” Mr. Ren called the legend a naked propaganda tool “for turning all citizens into screws that can be willfully placed anywhere.”

“That way, there is no need for democracy, human rights or freedom,” he wrote.

Dai Qing, a muckraking journalist and lapsed Communist Party member, said that many Chinese were offended by the patronizing message of moral righteousness. “Would I help a senior citizen or a child in need?” she said in an interview. “Of course I would, but not because I was told to do so by a government movement. Empathy is a minimal requirement of human decency, not one that should be directed by a political party.”

The editor of the state-run Global Times applauded the satirical spoofs that have appeared online, writes Danwei, which has a long tradition of reporting on Lei Feng and translated the following comment posted by Hu Xijin to his Weibo account along with the spoof photo above:

The louder the volume of the government campaign to study Lei Feng, the more such spoofs will be enthusiastically circulated online. This is the sigh-inducing balance of contemporary China’s public debate. When I see such Photoshop images, my heart just feels uncomfortable. But I know that the fact that such photographs appear is a sign of China’s progress. Making everything appear ugly is not just a way of thinking but has become a way of existing. Its importance to China is like that of the waste water pipes and sewers that even a city of light cannot do without.