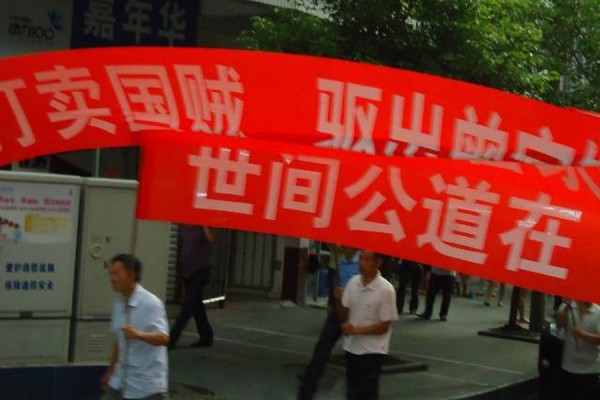 The recent controversy over forced abortions, which grew after officials in Shaanxi province forced a woman to abort her 7-month old fetus and graphic photos surfaced online two weeks ago, has reportedly grown uglier. The South China Morning Post reports today that the woman’s husband went missing Sunday evening after local officials and other residents of Zhenping county had spent days harassing the family:

Deng Jiyuan, the 29-year-old father of the aborted fetus, had been constantly followed by local officials and thugs, his family said. A large banner had been put up in their town calling them traitors and demanding they leave. Deng’s family at first thought he had fled but are now worried that might not be the case as they were unable to contact him yesterday, his sister, Deng Jicai, told the South China Morning Post.

She said the harassment started when her brother said he planned to go to Beijing for a television and online video interview about the abortion. He was then watched, followed, stopped and even beaten during several attempts to leave for the capital.

Deng Jicai said the family had been followed everywhere for more than a week, including to the hospital where her brother’s wife, Feng Jianmei, is staying. She said four or five men even followed her brother when he went to the toilet. “They followed us and said they would take us by car wherever we want to go,” she said. “We feel like prisoners.”

The harassment worsened after the family gave an interview to the German weekly magazine Stern on Friday. On Sunday, more than 40 men and women arrived at the hospital holding two banners reading “Beat the traitors soundly and expel them from Zengjia township”.

To recap, Feng Jianmei, seven months pregnant with her second child, was arrested on June 2, brought to the hospital and given an injection to induce labor after she failed to pay a 40,000 yuan (US$6,275) fine. She miscarried on June 4. Local authorities claim they acted within their rights to enforce China’s family planning policy, often called the “one-child policy.” But while the deputy mayor reportedly apologized to the family and pledged to punish the local officials responsible for the incident, comments and images on the web indicate a different response. The above photo made the rounds on both the Chinese and English-language blogs, including ChinaSmack, which translated the following microblog post detailing the online smear campaign also allegedly underway against the victim and her family:

On the 24th, @假装在纽约 once again posted a microblog message: Looked at the Zhenping discussion forum on Baidu, the local government has already organized a large amount of “water army” [individuals or companies that can be paid to post comments on the internet to help shape public opinion], its filled with abuse and rumors against the Deng family——that doctors exposed documents showing it was the Deng family who agreed to abort the baby; that Sister Jicai [a family member of Feng Jianmei] who is depending on selling out her country will soon enter the Japanese AV [adult video] industry as a “dark horse“; that the Deng family agreed to Japanese media interviews, going over to the Japanese, enemies of the country, no different from Chinese traitors; that no one in Zhenping county’s history has ever enjoyed better post-birth care than Feng Jianmei… The Shaanxi Forced Abortion case that has caused a sensation is once again creating waves on microblogs.

The Ministry of Tofu also translated the following Weibo post from Deng Jicai, the victim’s sister:

“I feel like crying but have no tears. Where is justice? Zengjia Township, where I was born and brought up, how can I still love you?I just don’t understand in what way I have committed treason! I don’t know what you mean by calling me a ‘traitor.’ My lord, in what way I have sold the People’s Republic of China? I didn’t beg you for pity for my miserable sister-in-law. I didn’t ask you for even the slightest bit of sympathy. Just get lost! Let us go home!!!”

At Tea Leaf Nation, David Wertime reflects on the incident and the netizen sentiment that has erupted in response:

You read that correctly. A local government is alleged to have staged a protest against its own citizen–only, that is, after robbing the citizen of a child just a month and a half away from entering the world.

If @作家草军书‘s assertion (retweeted from an earlier but less widely-circulated tweet by @假装在纽约) is true, it certainly proves the local government in Zhenping is truculent, not to mention tone-deaf. Also noteworthy is the scope of netizen reaction. Not only has this tweet been retweeted nearly 50,000 times and garnered over 21,000 comments, it has netizens commenting on government rot at the highest levels.

Despite the ugly scenes from Zhenping county, and perhaps in response to it, Bloomberg reports Tuesday that the Chinese Communist Party is tolerating the debate on the one-child policy. The state-run Global Times published an editorial on Monday asserting that China’s family planning policy needs reform:

Policymakers do need to reflect upon and readjust the policy. Over recent decades, the Chinese population has witnessed changes in its structure again. One of the most prominent changes is the growing aging population. It is necessary to prevent a horror scenario as the one-child generation is no longer able to support that of their parents as they grow older.

The government is already aware of this, and has loosened the one-child policy under specific conditions. For instance, if both parents are only children, they can have two children. Families with extraordinary pressure to take care of the elderly can also be exempt from the one-child limitation.

This loosening tendency should continue. Even in rural areas today, people have far different mentalities about giving birth. Younger Chinese couples understand that they should provide a good education and healthy environment for their children, and many have already dropped the idea of giving birth only to have a son.

After all, the essence of the family planning policy is to adjust the timing and scale of population trends, rather than rigidly limit the number of children.