Netizens don’t have to work very hard to subvert Zhang. Oftentimes, Zhang does it himself. Weibo user @IdleDairy (休闲日志) recently shared a screenshot of the major general on a CCTV talk show saying “China’s political situation is stable”: 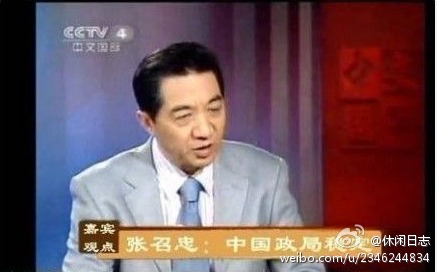 Even an image from CCTV can get a Weibo user into trouble, however. A number of IdleDiary’s posts have been removed by the user, possibly after receiving warnings from Sina Weibo. One such missing post is labelled with the warning “A Weibo user reported this post as false. Please do not believe rumors.” The Zhang screenshot is gone, too. 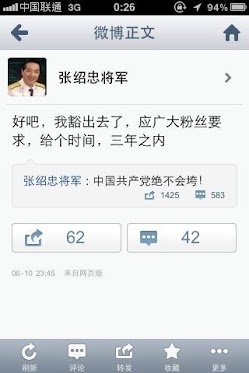 This post has disappeared, but GeneralZhangZhaozhong’s guesses at Euro 2012 soccer match outcomes remain.