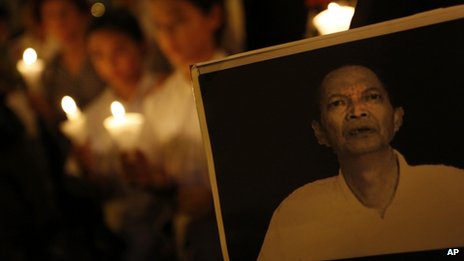 The death of political activist Li Wangyang, found with a noose around his neck on June 6, has caused outrage in China and beyond. Li spent over 20 years in prison for his involvement in the Tiananmen protests. Released for the second time last May, he was blind and nearly deaf from years of torture. Hanging from the bars of his hospital room window, hospital staff and local authorities insisted Li had committed suicide. His family and supporters, however, insists that it was murder: he was too ill, and his two feet were on the floor. Under pressure from Hong Kong activists, China has since promised to investigate the cause of death.

Weibo user ylovey528 posted this message and image on June 14 in homage to Li: 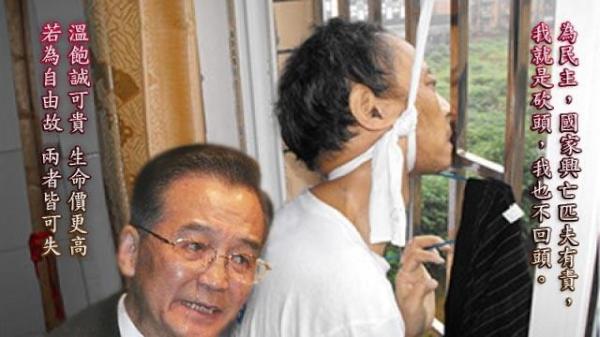 From Right to Left:

For democracy, an ordinary man will rise and fall with the nation. Even if I am beheaded, I won’t retreat.
為民主，國家興亡匹夫有貴，我就是砍頭，我也不回頭。

Premier Wen has notoriously apologized for arriving late to the scene of many natural and man-made disasters, most recently after last July’s deadly train crash in Wenzhou. Just days before his death, Li told Hong Kong Cable TV “I won’t retreat, even if I am beheaded.” The last two lines are adapted from a poem by Sándor Petőfi, a hero of the Hungarian Revolution of 1848; even Chinese schoolchildren know these words:

Life is dear, love is dearer. Both can be given up for freedom.
生命诚可贵,爱情价更高;若为自由故,二者皆可抛