No Weibo for the New York Times 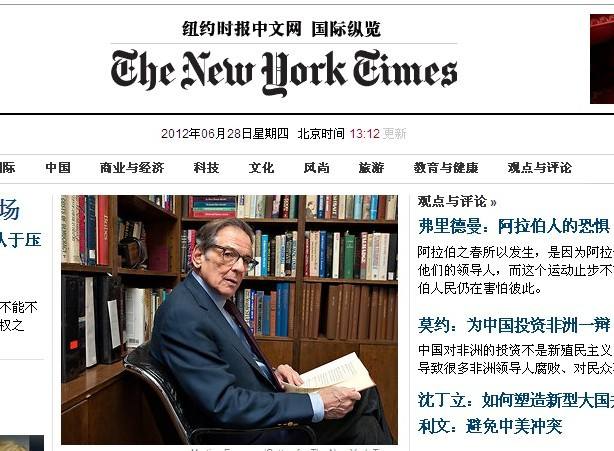 The New York Times Chinese-language venture, launched this Wednesday, is off to a bumpy start. While the website itself is running, the site’s Sina Weibo account went down just hours after its launch. It was up again on Thursday evening. “Given that the site was brand new, they could not have possibly posted anything controversial,” says Philip Chun at Shanghaiist. But Chun, CDT and other media outlets spoke too soon. @nytchinese is down again.

The Times Weibo account may have been shuttered not for anything it said, but for its mere presence. Times Foreign Editor Joseph Kahn says “We’re not tailoring it to the demands of the Chinese government.” The cn.nytimes.com server is based outside of China. In a blog post announcing the launch, staff writer Christine Haughney notes the Chinese site will adhere to the same standards as the English-language edition.

The Times gained 25,195 followers before the second shut-down. Its Tencent Weibo account is still up, with nearly 7900 followers, but its Sohu and NetEase Weibos are both down.

The Times Chinese edition includes translated articles and original Chinese-language content. It seeks a middle-class, urbane audience, as can be seen from its advertisers: Salvatore Ferragamo, Cartier and other luxury companies. That same audience thirsts for high-quality, incisive reporting. The question is, will the Chinese censors allow it to deliver, or continue to cut off major platforms like Weibo?

As the Times faces pressure to clean up for the authorities, Zhang Zhi’an, an associate professor at the Sun Yat-Sen University School of Communication and Design, sees the paper’s experiment as a litmus test for foreign media in China:

ZhangZhi’an: The New York Times Chinese edition has two issues worth paying attention to: 1) Will the Times translate and publish articles on sensitive subjects or which report negatively on China? 2) Which discrepancies will there be between the English and Chinese versions of the same article? These questions may offer a window onto the monitoring pressure and self-censorship of foreign Chinese-language media.

The Financial Times and Wall Street Journal both have Chinese-language editions, each with fully functional Weibo accounts. It’s unclear what the Times could have done to cross the censors. Hopefully, the paper will get a chance to answer Dr. Zhang’s questions.