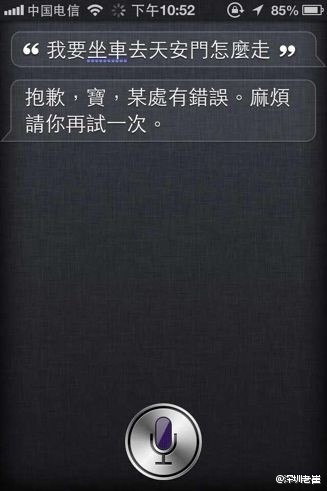 Siri, the iPhone voice recognition assistant, has just learned Chinese. Siri can wake you up, give you directions, even write text messages for you. But she won’t do it all. If you ask her, in English, where she was manufactured, Siri will only say, “That’s classified” or “I’m not allowed to say.”

Siri isn’t keeping much of a secret: a spate of worker suicides at Foxconn plants, where parts for Apple and other companies are made, made Siri’s birthplace famous.

Siri can be less than forthcoming in Chinese, too:

I want to drive to Tiananmen Square, how do I get there?
我要坐车去天安门怎么走？

It appears what went wrong was that the user asked Siri a sensitive question.

There are other questions waiting for Siri to refuse to answer. And if she decides to respond, she may cause a maelstrom:

PretendingtobeinNY: After Siri learns to speak Chinese, inevitably someone will ask her, “Is Taiwan part of China? Does the Scarborough Shoal belong to China or the Philippines? How many people died in the Nanjing Massacre?” If the answers aren’t standard [with the Party line], people will post things on Tianya like “Siri distorts history—Apple, get out of China!,” which will ignite a campaign to boycott Apple. Meanwhile, the madness will mount on Weibo, eventually leading to a Global Times editorial titled “China Must Say No to Apple.”

Translated by Josh Rudolph. Via SneezeBloid.