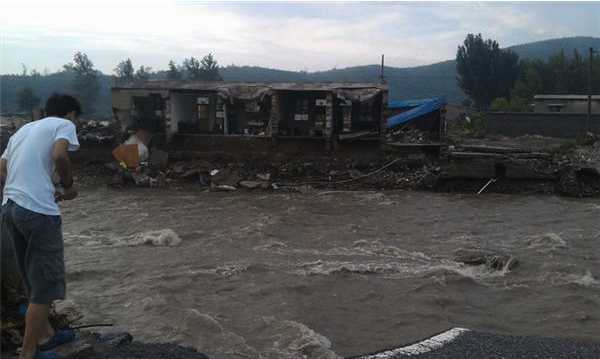 Update (August 23, 2012): The Fangshan authorities reported on July 23 that no elders died in assisted living facilities due to the flood [zh].

Netizens have reached out a digital hand to those left stranded by Beijing’s torrential rains. There are over 7.4 million posts on Weibo on the subject (北京 + 暴雨), many of them calls for help—and answers. From a CDT Chinese screenshot:

cellifa: I live near Tiantan East Gate. If anyone nearby needs to rest, you can come to my place. No gender preference, 2-3 people, direct message me.

J0j0JiaoJiao: Three to four girls can stay at my place. I have a hot shower, food, clothes and shoes. Any girls or older people who aren’t afraid of cats and dogs can stay here for the night. Send me a direct message and I’ll pick you up in front of the Xuantechenguang Police Station.

XiaoqianME: My office is at Zuojiazhuang A2 Beijing Friendship Garden 1-6H. We have water, snacks, TV, computers, wifi, beds, sofas, Sanguo Sha and hot showers! All for free! For real! I’m not a bad guy! If anyone is stuck nearby feel free to duck out to my place! This is what a Beijinger can do! I will wait at my computer all night! Don’t be a stranger! And I hope that people on the road are able to get home safely. @NumberTail Help spread the word.

UncleFlower: Already contacted them, they can go now.  // @Lonely_Epoch: I have a friend stuck at Chengshou Road who needs to get back to Lianri Ludao. Can anyone help her? One little girl and one adult, riding an electric bike, going in the direction of Lianri Ludao. Her cell phone number is 15175088361. Thank you!

While some embrace those in need, others have taken advantage of the chaos. Weibo user @SuYe reports hotel rip-offs, while @YanYaobin implores the government to follow the lead of ordinary citizens:

SuYe: I drove two people who had arrived from Russia to Zhongguancun. As soon as we arrived at their place, the rain stopped. They said, “Without you guys, we would be finished. Other people at least have cover, we have nothing.” We were very happy, even though it cost us a lot of gas 🙂 Hotels at Sanyuan Bridge jacked up their prices to over 2000 yuan a night, and some even dragged people to the Asian Games Village. There was a taxi driver who cursed at us from Sanyuan Bridge, “Messing with other people’s business!” Good luck to you all.

YanYaobin: Netizens from Wangjing started a car team to take some of the 80,000 people stuck at Beijing Airport home for free. A lot of residents got in their own cars and into the street to help people back home. This is the Beijing spirit! You bring warmth to this night of pain. At this moment, I am seriously concerned about the 62,000-plus government-owned cars. Where are you? Do you have the guts to get out there and do something? I’m betting on you rushing out and filling the streets. We won’t curse you tonight!

At least 37 have died in the floods, including a number of police officers. This post about one of these officers on the official Weibo of the city Public Security Bureau (PSB) has been reposted and commented on over 593,000 times:

PeacefulBeijing: On July 21, Beijing experienced its heaviest rainfall in over 60 years. The municipal PSB received many calls for help. At noon, Comrade Li Fanghong, chief of the Yanshan Branch Xiangyang Road Police Station, started to lead rescue operations in the rising water of Fenghuangting. He saved more than 50 people. At 5:20 p.m. Comrade Li went into the water again to rescue more. He touched a fallen electrical wire and made the ultimate sacrifice.

Individual heroism mingles with stories of systemic neglect. The state-run newspaper Global Times has acknowledged that Beijing’s under-built sewers are in part to blame for the mayhem, though it goes on to suggest “overhauling the entire network may be unfeasible, as it will take time and an enormous injection of cash.” On Twitter, Beijinger @MissXQ shares dire stories and photos, including reports that more than 200 senior citizens died in an assisted living facility in Fangshan, a poor district hit hard by the floods:

Source said more than 200 elders dead in a senior care center in Fangshan district in BJ due to the rainstorm.

The post abt over 200 elders dead in a senior care center in Fangshan had been deleted.

Tea Leaf Nation has translated more Weibo comments on the flood, while Foreign Policy has created a slide show of the devastation. Read more on the floods and the aftermath from CDT.