Carrefour Cozies Up to the Party 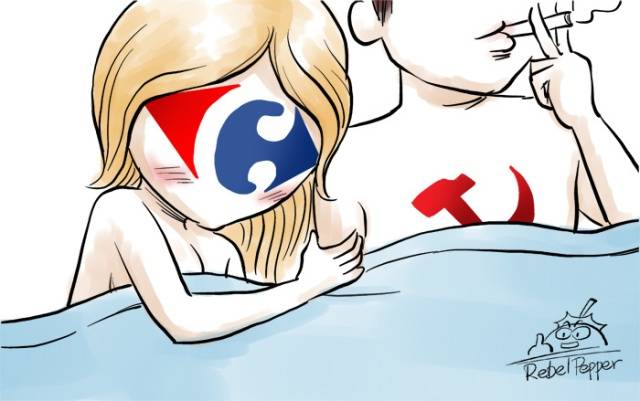 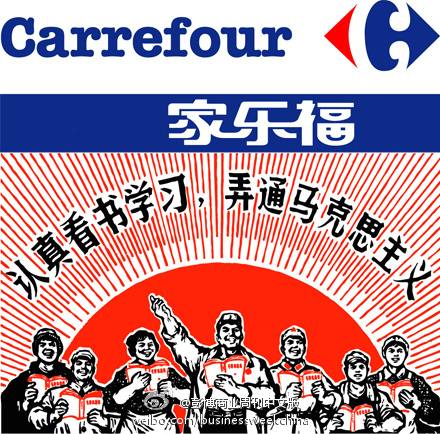 It started with organic farms. Now Chinese Communist Party officials in Beijing can enjoy their own Carrefour, the French supermarket which many Chinese citizens boycotted during the 2008 Olympic torch relays. Back then, a text message circulated accusing Carrefour of donating money to the Dalai Lama. Carrefour denied backing “illegal political organizations.” Now, the multinational is catering to the Party, literally.

The Chinese edition of Business Week quoted a Beijing Business Today report on Weibo, adding a quip and a spoof propaganda poster (pictured above):

businessweekchina: Carrefour has established a Party store and a Youth League committee, the first foreign retailer in China to do so. Since entering China in 1995, the company has come to realize the importance of establishing these organizations within the Party and Youth League in order to promote its corporate culture, bring staff closer together and push the company’s development… Dearest foreign companies, now do you get how to thrive in China?

The websites of both Business Week and Bloomberg went down briefly on Friday after they published articles revealing the assets of Xi Jinping’s extended family. Business Week’s Weibo account has disappeared, and search results for 彭博 (péng bó), the first two characters of Business Week’s Weibo name, are blocked. Either the journal hastened its demise or had a last hoorah when it realized its impending doom.

Via the June 28 and 29 editions of SneezeBloid.