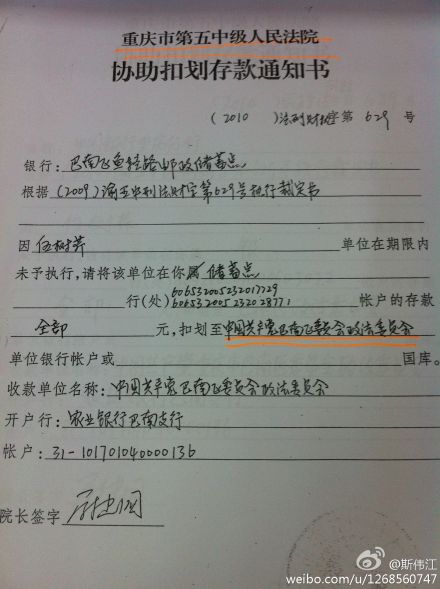 From Beijing to the counties, all levels of government in China include a politics and law commission. These commissions oversee all aspects of legal enforcement, among them the courts. Si Weijiang, one of Chen Kegui’s lawyers, posted on Weibo this image of a bizarre financial transaction, in which it appears the plaintiff’s bank funds were transferred from court to the local politics and law commission. Wu Shuqin, former head of Chongqing Yuqiang Commercial Group Qiangli Transportation Ltd., was arrested in 2009 on suspicion of “mafia crimes” (黑社会性质组织罪, literally “organized crime with black society characteristics”). Fined RMB 200,000, Si noted in Caixin that this amount is still far less than Wu’s total assets [zh], which also include stock holdings. It is unclear whether Wu failed to pay the fine or had her funds transferred for other reasons:

SiWeijiang: In Chongqing’s “beat black” campaign, the courts give money to the Politics and Law Commission! If there’s a picture, there’s proof.

Notice of Withdrawal or Transfer of Funds

Bo Xilai shot to fame in part through his “beat black” campaign against organized crime. Now that he and his wife are embroiled in scandal, the mafia-like tactics Bo’s administration used to “beat black” are coming under close scrutiny. While Bo is singled out, however, he is not unique in bending the law, as Si pointed out in the case of Guizhou tycoon Li Qinghong. Like Wu, Li was also charged with mafia-like activity. He appealed in mid-July on the claim that he has no ties to “black society.”