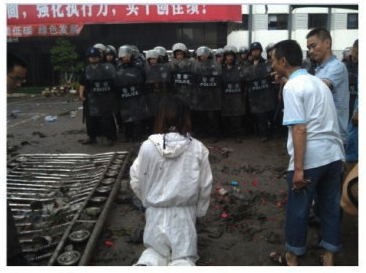 China’s rascal literatus Han Han has tackled the violent crackdown on unarmed protesters in Shifang, Sichuan Province over plans to build a molybdenum copper plant. Although the local government has suspended the project, it is also seeking to punish the instigators of the protest. Bloody photo and video continue to circulate on Weibo, long after one would expect the subject to be scrubbed clean. That may be thanks to Han Han himself.

Four years ago, I went to Sichuan after the Wenchuan Earthquake. I faintly remember that a few days after the quake the government decided to kill ownerless dogs in the street in order to prevent epidemic. As a dog-lover, I was upset, but understood the government’s decision in a time of emergency. When I left Sichuan, I took an ownerless dog. After he passed quarantine I brought him back to Shanghai. I mention this today because this dog is from Hongbai Township, Shifang.

Tonight, Shifang has come up again. I remember walking through the city four years ago, the rubble of enormous factories flanking the road, troops stationed on the ground. These scenes seemed like dreams, like lies.

I think back to my hometown, the village of Tinglin, in Shanghai’s chemical industries district of Jinshan. I saw how a place of clear waters, quaint houses and clean air became what it is today. In ten years–it only took ten years–the river looked like dye and air smelled like poison. When the government wanted to develop pollution-heavy industries, it told the villagers that the GDP needed to grow. It needed more tax revenue to make everyone happy. Ten years later, quality of life hasn’t gotten any better, but now we’re breathing bad air. The river is a horrible sight, changing colors seven times a week. You can tell which day of the week it is just by looking at the river. The people of Tinglin have chosen to endure all this because the environmental department’s reports show that everything is up to standard. Of course, if you have no limits, anything is standard. But have you seen water so bad that even crawfish can’t live in it?

You know, the Chinese people are really a lot like crawfish. They are quite adept at enduring hardship and soldiering on. They can live in any kind of environment. But even though they have two claws, they’re easy to stab in the back, powerless to pinch their attackers. Once they are startled, their first reaction is to back off. Even so, they are still brought to the dinner table in the end. The powerful and the rich feast on them, wipe their mouths and say, “Not bad, but a little spicy.”

And so I want to tell the Shifang government that this is not an earthquake, this is not an emergency. People’s requests for improving their environment must be respected. You leaders change every few years. You take on environmental destruction with nice-looking certificates of achievement. If you do well you get promoted, if you don’t you get jail. The best of you emigrate, the worst of you are shot. But none of you actually live in the pollution. Only ordinary people live there. Even though you already stopped the plan to mine molybdenum copper, I think the pent-up public anger this project released comes from a deep-rooted animus that’s about more than molybdenum copper. The proposed plant started it, but now it has become a mass incident. I hope that the people’s resistance can proceed in a rational, smart and safe way. You should seek negotiation. Don’t suppress the movement, don’t give people an excuse to mob, riot, steal, break and loot.

I also want to tell the Shifang government that your decision to disperse the crowd was too sudden and excessive. I can understand that as a local government, you have no experience dealing with this kind of mass incident. Once you see the government offices surrounded by people, and the sign that was over the door broken on the ground, of course you feel annoyed. You look down at the people and then up at the calendar, oh gosh, it’s the Organization’s birthday.* The whole situation feels bad, and it’s happening on the wrong day, and something terrible will happen, and you might lose your position, and so you conclude that you must disperse the crowd before anything else. These people are not even celebrating the Birthday, so fine,  you bust it up, they’re not giving you any face. I can imagine the order from the policy-makers: “Settle this as soon as possible.” Then the ones carrying out orders think, “As soon as possible… disperse… got it… dial 0101…” And so there’s no room left for the most basic exchange of words. Could it be that you’re treating the people’s anger at environmental destruction like an epidemic, to be stamped out in one day? No need for talk, just throw the tear gas? Having gone through Wenchuan, don’t you know that the more emotions build up, the bigger the explosion? When people release their anger, even if it’s over the top or started by someone from the outside, can’t you take it on good faith? You’d rather pepper spray them? So this is how the police connect with the people, by crying pepper spray tears with them?

Honestly, I’m no expert. I have right to speak on the matter of the plant. I just think that mass incidents shouldn’t be dealt in this way. Officials claim that the people rushed through the doors of the government offices, but there was a lot more of the state machinery chasing down and beating people up in the pictures I saw. If you’re merely preserving order and dispersing crowds, where is the need for violence and pepper spray? Such a rush to armed force, even low-level armed force, will only spread the situation further. I care about Shifang. It’s the same as caring about Tinglin. I hope the people who survived the 8.0 earthquake can survive the crackdown, and I hope the government (building) that survived the 8.0 earthquake can survive the questioning.

* July 1, the anniversary of the founding of the Chinese Communist Party.