Netizens are going crazy over the telling placement of headlines in yesterday’s edition of the Shandong paper 6 AM Today (今晨6点). At top is a photo of Gu Kailai at her trial and the headline “Bogu Kailai’s Commuted Death Sentence.” (Chinese media refer to her using by combining her married and maiden names.) Below the fold, a mouse peers out from a beer can. Unable to squeeze itself out, the headline reads, “Go on a Diet, Then Come on Out.”

The weight Gu Kailai put on between her arrest and trial has many guessing at the conditions of her detention, or whether she even had a body double take the heat for her. There’s little hope for true justice, either. A commuted death sentence can easily become a life sentence; Gu may even leave prison in some years’ time. 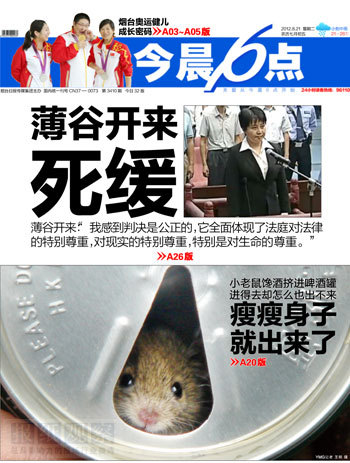 A little mouse’s thirst for booze led it into a beer can. It made it in, but no matter what it can’t get out.

Go on a Diet, Then Come on Out

Read more about Gu Kailai and her husband, Bo Xilai, from CDT.

Via Over the Wall. Translation by Josh Rudolph.