Netizen Voices: The Shame of Waiting 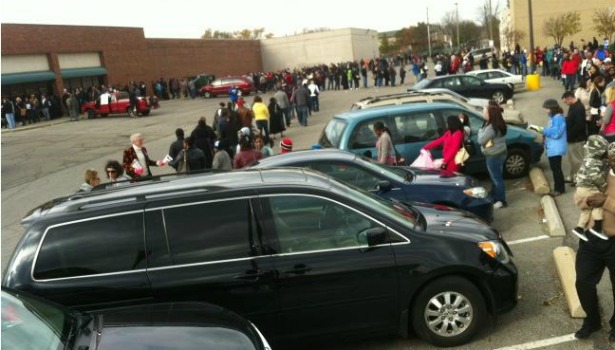 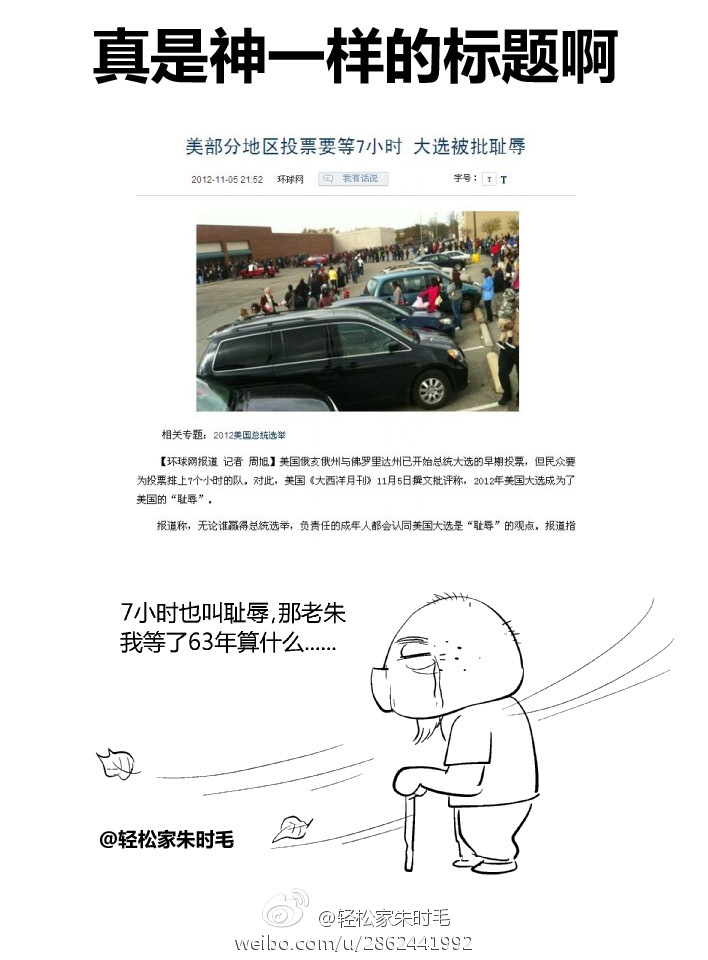 Above, a screenshot of the Global Times‘ “unbelievable” (神一样) headline. Below, a weary old pig weeps, “Even seven hours is called shameful. Then what do you call me, Old Pearl, waiting for 63 years?” (Artist: Peaceful House Pearl Shimao)

Yesterday’s Global Times story “Seven-Hour Wait to Vote; This Election Is Shameful” caused an uproar in Chinese cyberspace. Reporting on the long lines at polls in Palm Beach County, Florida, the article concludes, “The U.S. claims to be free and democratic, but the rights of the people are far from guaranteed. It is increasingly difficult for a U.S. citizen to cast a vote and for that vote to be counted” (美国宣称自由民主，但民众的权力并未得到保障。美国公民投票越来越难，他们的投票也越来越难被统计到。) But many readers could not even get beyond the incendiary headline. Here is what some of them had to say on Weibo:

ZhaoHanqingJason: What is a ballot?

EverydayEatPoison: Most Chinese people would say they have waited for over 5000 years. The progress is that decision-making has expanded from one person to a few dozen.

UncleDingdang: If it’s a shame for American voters to wait for seven hours, then what should it be for Chinese people to have waited for over 60 years?

runforu: China has no qualifications to report on the shame of the U.S. presidential election. It’s even more shameful that you have never held a general election yourself.

PeacefulThinker2011: Wait another seven years and it will be a full 70!

Woaiwf: Never mind the ballot, we haven’t even got the shame yet.

7wedding: Among all the countries in the world, the U.S. is most thorough in self-criticism. The principle of reporting there is to lean towards the negative, not the model. This offers the Global Times endless fodder.

QSWYT: We don’t even have the opportunity for shame.

YutingUSA: This afternoon my grandma accompanied me to cast my vote. We have finished our dinner and come back home now. No one at the polling station that I went to said they waited for seven hours. In the big picture, waiting seven hours in line is better than waiting 70 years and not even being allowed to line up.

Read more about the Chinese take on the U.S. elections here.