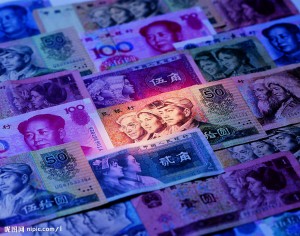 The currency of the People’s Republic of China is the renminbi 人民币, literally the “people’s money.” As comedian Zhou Libo explains, the Great Helmsman appears on all banknotes worth one yuan and above, while different ethnic minorities are featured on notes of smaller denominations:

The value of “the people” in the people’s money is 80 cents in total!

When you open your wallet, the most miserable thing is that people of all ethnicities are still there, but Chairman Mao is gone!

What else is of “the people” in name only? Government offices, the People’s Bank of China (which actually makes monetary policy, not loans), and the broken healthcare system, according to Zhou:

In our country, the places with “the people” posted over the door are all packed with security checks, representing the grandeur of the “the people” to the greatest extent. Normally, these places which forbid people from entering and exiting freely, like “the people’s government,” “the people’s court,” etc…

You finally find a “people’s bank,” only to learn that it doesn’t offer deposit service.
Only “people’s hospitals” allow let you enter and exit freely, but it is the last place the people want to go…

Via MalaHQ. Translation by Mengyu Dong.

* One yuan is equivalent to 10 mao or 100 fen. Since there is no equivalent to the mao in most other currencies, five mao is translated here as 50 cents. Similarly, the Fifty Cent Party (五毛党) is literally the “Five Mao Party.” Back.

Drawing the News: Another Brick in the Firewall