Phrase of the Week: Compare Fathers 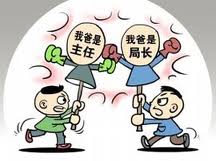 Most famously, in 2010, Li Qiming drove drunk and ran over a college student, killing her. When he exited the car, he famously declared, “My father is Li Gang,” and asked who dared sue him. His declaration later became one of the year’s most viral Internet memes. More recently, Li Tianyi, the son of a general in the People’s Liberation Army, was arrested for his involvement in a gang rape; it was widely believed that the younger Li felt he could get away with such acts because of his father’s status and wealth.