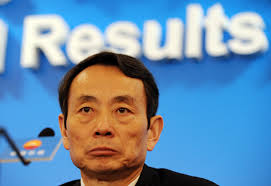 As the Xi Jinping administration’s crackdown on corruption intensifies, the government announced Sunday that Jiang Jiemin, director of the State Council’s Assets Supervision and Administration Commission and former chair of China National Petroleum Corp., was under investigation for “suspected serious disciplinary violations.” This announcement comes after the South China Morning Post reported that former security chief Zhou Yongkang was under investigation. Jiang was a protege of Zhou’s in the oil industry. From the South China Morning Post:

Jiang is the first director, a minister-level position, in Sasac’s 10-year history to have been publicly investigated by the Communist Party’s anti-corruption body. He was appointed head of Sasac in March this year, after a 7-year stint as the chairman of CNPC. It is unclear if the investigation is related to a series of high-profile arrests and probes involving senior executives at CNPC in the last few years.

The Post reported on Friday that top Communist Party leaders have reached a consensus to start a graft probe into Zhou Yongkang, the Party’s former security tsar and a member of the its top power club, the Politburo Standing Committee. Jiang is known as a long-term protege of Zhou’s. Both had decades-long careers in China’s oil industry and at CNPC.

Last year, Jiang’s name had also appeared in a secret Party investigation into a bizarre accident which killed the son of Ling Jihua, a top aide of former president and Party leader Hu Jintao. [Source]

Read more about the accident that killed Ling’s son and Jiang Jiemin’s alleged role in the cover-up, via CDT. The South China Morning Post also reported that the investigation into Zhou could possibly lead to foreign probes into CNPC.