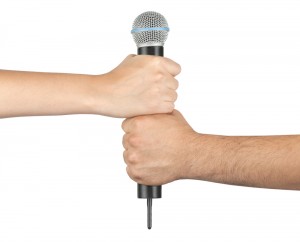 The Party is listening to the people. At least, it’s starting to listen. Following the rise of Weibo (and now WeChat) as China’s digital fora, authorities at every level of government are hiring polling firms, while universities and state-run media are opening social media monitoring offices.

“The government is trying to understand public opinion on an unprecedented scale,” writes Washington Post Beijing bureau chief Simon Denyer (via CDT), who interviewed leadership at the People’s Daily Online Public Sentiment Monitoring Center. The People’s Daily analyzes every single post on Weibo, according to Denyer.

The monitoring center produces mostly private reports, but on Monday it shared some of its findings with the public via its own primary source, Weibo:

A large number of central government media outlets, along with provincial and municipal Party newspapers, have launched Weibo accounts, comprising nearly 200,000 of the leading accounts in the “National Weibo Team.” They guide public opinion on the subjects of sudden incidents and sensitive issues, seizing back the social media “microphone.” As of July 26, @人民日报 [People’s Daily], @央视新闻 [CCTV News],  and @新华视点 [Xinhua Viewpoint] lead official accounts in metrics. [Source]

The media were first charged with “public opinion guidance” (舆论导向) in the wake of the Tiananmen protests of 1989, and essentially stipulates that news coverage stay in line with Party policy and “spirit.” The People’s Daily elaborated on this point in a comment on its first weibo, including a table of social media metrics on the three most active official Weibo accounts listed above:

Official media accounts decode public opinion, respond to hot topics, promote the credibility of the ruling party, and warm the hearts of the people, while also unleashing official media’s capacity and expanding coverage. Official weibo appeal on behalf of the people and speak on behalf of the system, opening access between the two fields of public opinion. They are the expression of Party journalism’s flexibility, resilience, and ability to keep up with the times. [Source]

In the comment thread for this second weibo, many netizens wondered if the official media–and by extension, the central government–are really listening to them after all:

抑郁症先森：The use of the term “seize” is incredibly accurate, perfectly embodying their longtime style of banditry.

武黎嵩: How many enemies are there on the Internet, how many reactionaries, how many aggressors, that you have to use words like “seize back”? All netizens are legitimate. We all have People’s Republic of China ID cards!

作家-天佑: From whom have they “seized” [the mic]? From the people? Damn.

段海新_THU: So the central media has seized back the microphone on Weibo. This is the way of the despot, the logic of habitual robbery—everything has to be stolen.

文烂阁正字：Why must you always seize the microphone? Can you not stop for a minute and have a good listen?

干瞪眼不着急：Party media are more shameful by the day, and every day ordinary folks loathe it even more.

江强华的微: You seize every opportunity for the ordinary people to speak. Is the next step seizing their lives?

The two People’s Daily weibo drive home a flaw in China’s public opinion monitoring: much of what the government hears on Weibo is the sound of its own voice.

Read discussion of the Post article abroad at CDT, and more netizen responses at CDT Chinese.