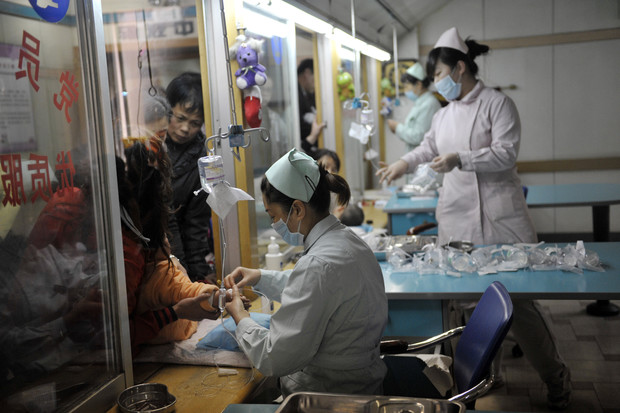 Toddler Wang Xiaobu was struck down in July by a motorcycle outside her home amid the rice terraces of Languan, a village deep in the mountains of the poorest part of Guizhou, China’s poorest province.

The 3-year-old was rushed by her parents past chicken coops and duck pens to the village clinic, a home doubling as a bare-bones dispensary. Xiaobu’s bloodied head was bandaged by an attendant who lacked the skills and equipment to stitch her wound or check for internal bleeding.

Four years ago, the story would probably have ended there, with Xiaobu’s parents – unable to afford even to fix their broken mobile phone – taking her home to recover or die. Instead, the biggest health-care overhaul in history meant government subsidies would now cover almost half their daughter’s medical bills, so they bundled Xiaobu into a borrowed van and raced 75 miles (120 kilometers) to the city hospital.

As U.S. President Barack Obama struggles to implement reforms that will extend health coverage to more of the estimated 50 million uninsured Americans, China’s 1.4 billion people are experiencing a revolution in care. Chinese leaders are betting that better, more affordable medical treatment will help defuse social tension, as well as boosting economic growth by freeing up savings set aside for possible health crises. [Source]

Even before the overhaul, China had achieved substantial improvements in life expectancy and neonatal mortality since the 1990s. Its transparent approach to the H7N9 flu outbreak that began in February also suggested a positive departure from the damaging opacity that surrounded SARS ten years previously.

On the other hand, researchers into overuse of antibiotics have since found the authorities less forthcoming. Meanwhile, patients remain impatient with available health care, sometimes violently so, while many migrants are still forced to resort to unauthorized “black clinics”. In addition, the system faces growing pressures from the ageing population, the spread of diabetes, and the effects of pollution.