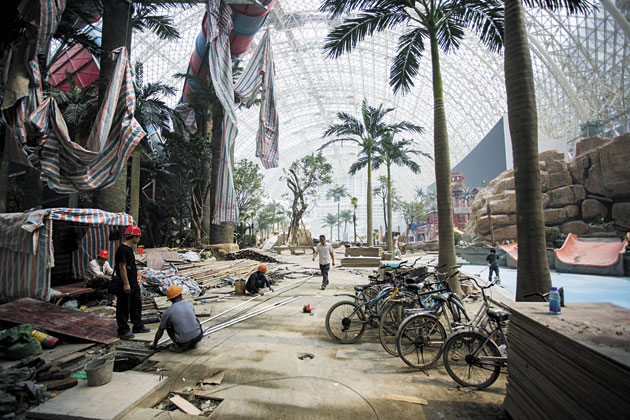 The Telegraph’s Malcolm Moore visits the world’s largest building, Chengdu’s New Century Global Center, and finds it mostly empty. Following the reported detention of its billionaire creator Deng Hong, he writes, it has become “China’s largest and most embarrassing monument to the allegations of corruption that have wormed through the Communist Party.”

Among the offerings inside is a shopping centre of four million square feet, a convention centre, a university campus, an Intercontinental hotel, a pirate ship, a skating rink, an Imax cinema and a 54,000 sq ft artificial beach, flanked by a 500ft LED screen that is roughly the same height as the Statue of Liberty and displays tropical sunsets to swimmers.

It is a marvel, even on the ever more ambitious scale of Chinese mega projects, and while no one knows how much it cost, the local government is rumoured to have spent as much as £5 billion [$8 billion] on the project. “We are absolutely full at the weekend,” said one employee at the Lavazza coffee shop inside.

[…] Sources in Chengdu suggested that the building might soon be taken over by the government and that Mr Deng would be lucky to escape prison. [Source]

At Businessweek, Christina Larson described the building as a symbol of China’s post-financial crisis “addiction” to debt-fueled construction and resulting overcapacity.

The Beijing-based firm J. Capital Research dubbed 2012 the “Year of the (White) Elephant” in a report detailing some of China’s questionable infrastructure build-out. To take one example, 70 percent of the country’s airports lose money, yet more are being built in small and remote cities. At the shiny new Karamay Airport in far western Xinjiang province, there are four check-in counters serving two flights daily. Local governments have splurged on “new towns” and “special zones,” many of which have already fallen into disrepair. The $5 million Changchun Zhenzhuxi Park, intended as a scenic area, is now a large public garbage dump, as the local landscaping bureau never agreed to provide maintenance. Near the southern city of Hangzhou, a forlorn replica of the Eiffel Tower overlooks a faux Paris—the ersatz arrondissement attracted hardly any residents, and local media have dubbed it a ghost town.

“In China, you often hear people say they’re building for the future,” explains [Patrick] Chovanec. “But if you build something and it’s empty for 20 years, does that make any sense? By that point, it may already be falling apart.” [Source]