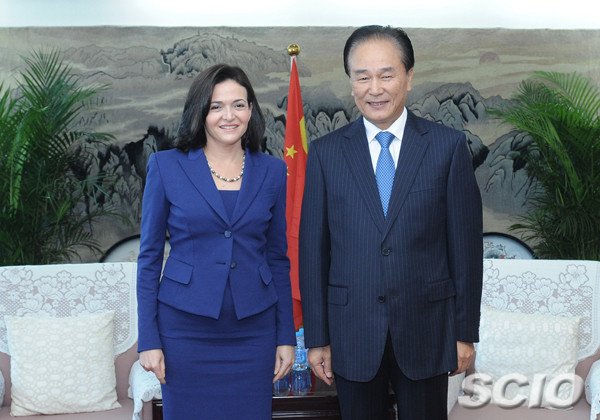 Bloomberg News reports that China hands aren’t looking too far into Sheryl Sandberg’s trip to China this week, where she met with the head of China’s State Council Information Office:

Sandberg met with Cai Mingzhao, head of China’s State Council Information Office, yesterday and discussed issues including the “important role” Facebook plays in helping Chinese companies expand overseas and cooperation, according to a statement posted to the agency’s website today. The statement didn’t say what cooperation was discussed.

[…]”I would be very surprised if it means that the position on Facebook has changed,” said Bill Bishop, an independent technology industry consultant in Beijing, told Bloomberg News. “The reality is that to comply with Chinese laws and regulations, they would have to have limited or no contact with the rest of Facebook so what’s the competitive advantage? I think they’re kind of stuck.”

Sandberg declined to answer questions about Facebook’s plans for the Chinese market when speaking at the Cheung Kong Graduate School of Business in Beijing yesterday. She is attending a conference organized by the World Economic Forum in the Chinese port city of Dalian today. [Source]

Access to the social networking site has been permanently blocked by China’s Great Firewall since 2009.