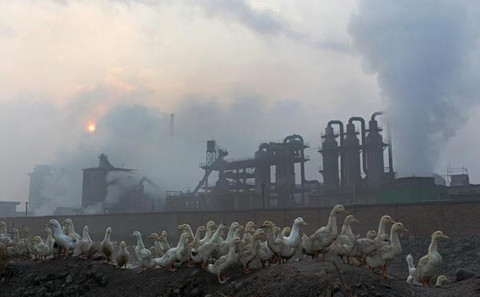 Farmers in several Chinese provinces sold rotten fruit to distributors, which was then bought by canned fruit producers and juice manufacturers to cut costs, the 21st Century Business Herald said in the report on Monday.

“We take this very seriously and have urgently deployed food safety teams in Anhui, Jiangsu, Shandong and other provinces to immediately open an investigation,” the China Food and Drug Administration (CFDA) said in a statement on their website, seen by Reuters on Tuesday.

[…] To deal with food security, China has expanded a pilot system that tracks the movement of meat and vegetables to the supermarket shelf. [Source]

At chinadialogue, however, the University of Pennsylvania’s John Yasuda explains the difficulties of tracking products through China’s “incredibly complex” food production system:

[…] You have several million farmers with thousands of traders that sell to a host of wholesale markets, and then distribute to a range of processors, supermarkets, and wet markets throughout the country. This makes traceability near impossible and supply chain management extraordinarily challenging. […]

The easy answer, the answer that everybody gives is ‘well, then just get rid of these small farmers, and make them operate in larger production units’, but it isn’t that simple. You have a development problem; many of these small farmers depend on their land to survive. As a result, the government experimented with vertically integrating farmers in industrial production chains. However, pushing everyone in the direction of industrialised agriculture without a strong regulatory framework to monitor food safety creates huge risks.

This is exactly what happened in the dairy sector, and led to the melamine crisis of 2008. Small farmers were vertically integrated into large dairy companies that did not have the capacity to provide sufficient oversight for a large, fragmented production base. [Source]

Yasuda also discusses in some detail the structural problems in China’s food production and inspection systems, how the E.U. offers a viable model, and what is wrong with existing reforms, overcentralization and “entirely too punitive” crackdowns.

At Mother Jones (via CDT), meanwhile, Tom Philpott has repeatedly highlighted the potentially dangerous tendency towards overuse of antibiotics as another risk of industrialized farming.