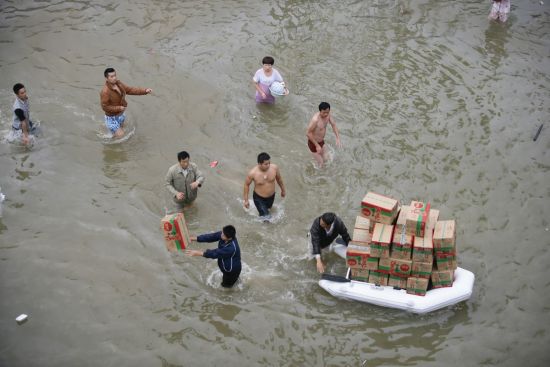 Residents of Yuyao, Zhejiang have taken to the streets to condemn the official response to flooding in their city from Typhoon Fitow. Yet while social media played a major role in determining the reaction to other recent natural disasters, including 2012 floods in Beijing, social media has been relatively quiet on this issue, amid a broader crackdown on online speech and rumors. Adam Minter writes for Bloomberg:

By some accounts, Yuyao’s flooding has been as bad, if not worse, than Beijing’s last year. But coverage on social media has been nowhere near as intense. According to data collated and reported by a researcher at the Communist Party’s People’s Daily Public Opinion Monitoring Center, during the most intense period of flooding:

Monitoring found that there were 170,000 posts with news of the Yuyao floods on Sina Weibo, far lower than the 4.99 million tweets following the Lushan earthquake, and the 610,000 tweets following Beijing’s July 21 rainstorms and flooding of last year. Similarly, on further examination, there was lively discussion about the Lushan earthquake among the accounts belonging to the top fifty opinion leaders, yet in regard to the Yuyao floods, 27 opinion leaders forwarded news, and only 16 people published commentary.

Some of the decline in posts to Sina Weibo might be attributed to the increasing popularity of the Weixin — or WeChat — messaging service, which incorporates social-media features. But even the monitoring report makes reference to the government’s ongoing “opinion management” activities. China’s online citizens, especially the most high-profile among them, have clearly begun censoring themselves for fear of arrest. [Source]

Liz Carter at Foreign Policy discusses the chill on social media which is impacting the response to the floods:

Social media discussion of the flooding and the protests was eerily limited. Yes, Yuyao residents shared pictures on Weibo of police barricades, injured protesters, and smashed car windows. And some of these photos made their way to Twitter, which is blocked in China. But information on Chinese social media spreads most widely when shared by prominent users. In previous natural disasters, China’s active social media would have been abuzz with prominent account holder re-tweeting the photos, asking sharp questions and calling for government accountability. The online response to Yuyao registered at a noticeably lower decibel, even as citizens massed in on-the-ground protest.

One user conjectured that “posts about Yuyao are being deleted at an unprecedented speed.” Pang Hurui, a public opinion analyst with the People’s Daily, a Communist Party mouthpiece, noted that “influential Weibo users who comment on politics and current affairs are falling silent, and markedly fewer people are discussing and paying attention to the flooding in Yuyao.” [Source]

As the South China Morning Post reports, even the official media appeared to be censoring themselves, as CCTV failed to deliver on a program investigating the causes of the flood:

In a Weibo preview of its daily news show “Economics 30 minutes,” published earlier on Thursday, CCTV’s economy news channel, CCTV2, – claimed its reporters had discovered the cause of the city’s terrible flood after it was hit by Typhoon Fitow.

Yet to the dismay of its viewers, the programme aired at 9.20pm mentioned nothing about Yuyao or the flood. It was instead devoted to a discussion about wine. [Source]

Meanwhile, Global Times criticized the role of “public opinion” in the dismissal of a local official who was photographed being carried through the flood on the back of a villager:

However, with more details being disclosed, the incident was not as black-or-white as people thought. According to a Beijing Youth Daily interview with both the village leader and the official himself, they were fellow villagers and good friends. The official had intended to take off his shoes to wade through the water before he was stopped by the village leader, who insisted on piggybacking him through the water. Further, the official was not wearing “expensive shoes” as cited on Weibo, but a pair of 100 yuan ($16.39) shoes made of cloth.

As a public servant who vowed to serve the people before taking office, the official misbehaved when he was on an official visit, and deserved the appropriate punishment, even though his misdeed is probably based on other people’s good intentions. However, this so-called grass-roots triumph is not fully based on fact. The intervention of public opinion also makes a great difference.

In recent years, a phenomenon has emerged along with the magnification of individual voices in the Chinese community. It is putting great pressure on the authorities, and attempts to control the progression of certain events, even at the cost of giving up what they are advocating – justice, legitimacy and transparency. [Source]

Propaganda officials have issued directives limiting reporting on the flood response, including one which commands: “The media must take care to strengthen positive reporting. Do not make trouble for the disaster relief effort.”