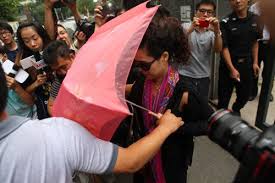 Feminist legal scholars say that a precedent set by 17-year-old gang rapist Li Tianyi’s ten year prison sentence “may improve the lives of millions of Chinese.” Li, who pled not guilty, and his mother, a famous singer for the People’s Liberation Army, had insisted that the court should take into account the victim’s occupation as a bar hostess. The court disagreed. Didi Kirsten Tatlow reports at The New York Times:

Essentially, the Haidian District Court in Beijing ruled that even if a woman is a sex worker, as Mr. Li alleged, that doesn’t mean it’s O.K. to rape her.

“The court didn’t go along with a quite widespread attitude, and an argument of the defense, that women in this line of business, women who are not virgins, deserve what they get,” said Zhang Rongli, a professor of law at the China Women’s University.

“I feel the court’s decision is a very good answer to that argument and to that prejudice that you can divide women into good and bad women,” Ms. Zhang said. “That was really well done of the court.”

[…] Here’s what the court said: “As for the assertion about whether the victim was or was not a ‘bar hostess’ or a virgin,” that was a question of “individual privacy,” which “has no influence on the determination of the facts of the case.” [Source]