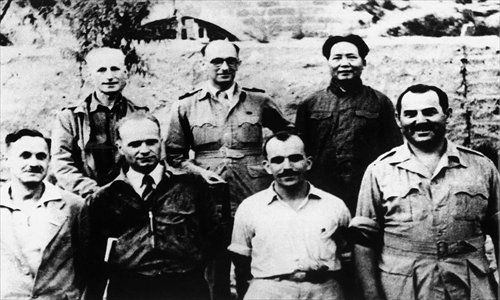 The Global Times reports on an exhibition co-sponsored by the State Archives Administration of China entitled “Red Star Over China: Chinese Communists in the Eyes of Foreign Journalists.” The exhibition’s title pays homage to American journalist Edgar Snow’s seminal book, and displays the work of western journalists covering China in the pre-Cold War era—before the founding of the PRC and in a day when China’s young Communist Party intrigued many a left-leaning foreign correspondent:

China between 1936 and 1948 was in one of its most turbulent periods. The country was invaded and torn apart. The stories of this time are well-known but a new exhibition throws light on some original insights and the firsthand accounts of 13 foreign journalists who came and worked in China at that time.

[…]In June 1936 the famed American journalist Edgar Snow came to China looking for scores of answers to questions about the country and China’s revolution. He went to the stark highlands of Northwest China looking for authentic soldiers and communists who were completely unknown to the West.

[…]Other journalists featured in the exhibition include Israel Epstein, a Jewish writer who was born in Poland but settled in China in 1917 with his parents. After the War of Resistance against Japanese Aggression broke out, he worked as a correspondent for United Press International visiting war zones throughout China.

Epstein returned to China after the People’s Republic of China was founded in 1949 and was given Chinese nationality in 1957. He became a member of the Communist Party of China in 1964 and was elected a Standing Committee member of the Chinese People’s Political Consultative Conference in 1983. Although Epstein suffered persecution during the Cultural Revolution (1966-77), he remained dedicated to communism until he died. […] [Source]

The Atlantic has more on the history behind the works on display, putting the ever-changing tides of the mainstream news narrative into context, and noting that the historical value of the archives may have been “lost amid propaganda”:

Even today, as the once-dominant fear of the spread of communism has been extinguished, Western media treats China with a mix of awe and anxiety. Now, the Communist Party is portrayed as a vast, corrupt bureaucracy—a far cry from the scrappy underdogs of the 1930s.

[…A]lthough the exhibit’s introduction claimed that these dozen or so reporters presented a “fair and true image of the Chinese Communists,” their work was clearly selected carefully to represent only positive portrayals of the Communist rise. And even though the exhibit appeared to be targeted at foreign visitors, its historical value got lost amid the propaganda.

And that’s a shame. Western affection for China’s Communists during the 1930s is so interesting precisely because it requires no embellishment; the reporting by Snow and others reflect a time before perceptions turned decisively against Mao Zedong’s Communists. Unfortunately, visitors seeking to broaden their understanding of how the world sees China—ostensibly the point of the exhibit—are left with more questions than answers. [Source]

“Red Star Over China: Chinese Communists in the Eyes of Foreign Journalists” will be on display at the Shanghai Municipal Archives Bureau until the end of 2013. Also see a Xinhua write-up on the exhibition from its Beijing showing earlier this year.