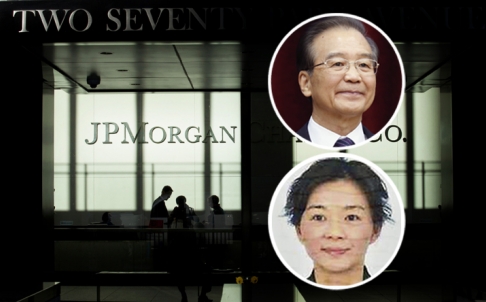 Days after The New York Times exposed the connection between JPMorgan Chase and “Lily Chang”, pseudonym of Wen Jiabao’s daughter, more foreign media websites appear to have been added to China’s long blocking list. From Paul Bischoff at Tech in Asia:

The Chinese websites for the Wall Street Journal (cn.wsj.com) and Reuters (cn.reuters.com) have both been blocked by the Great Firewall of China. You can check the status of these websites in real-time here and here, respectively. Their English-language sites are still reachable.

[…] Last summer, the Chinese government blocked several high profile news sites after revelations about a secret fortune held by then-premier Wen Jiabao surfaced. The New York Times, Bloomberg, and BusinessWeek were all added to the long list of censored websites, and those blocks remain in effect today. [Source]

The Chinese site of the Times’ apolitical style magazine T also became inaccessible shortly before the JPMorgan report was published, but is now available again.

The blocking of the news sites did not stop the swirling discussion of Lily Chang on weibo. From Amy Li at South China Morning Post:

While her adopted surname matched that of her mother’s – with the Taiwanese spelling, ‘Lily,’ the English first name Wen Ruchun picked, seems to have partially reflected her mother’s given name, ‘Peili’.

[…] “Should our ‘sister house’ Gong Aiai be given her innocence back since ‘Lily Chang’ is also holding double identities?” wrote Guangzhou-based microblogger Li Tie. Li alludies to the case of Gong Aiai, a deputy bank chief in Shaanxi province who gained nationwide notoriety after she was accused of purchasing dozens of properties using false identities. In September Gong was sentenced to three years imprisonment for faking IDs.

“But if a second ID card is issued by government agencies [and not forged], it’s still considered legal,” Hou Jing, a Chengdu-based lawyer, pointed out to the South China Morning Post on Friday. [Source]