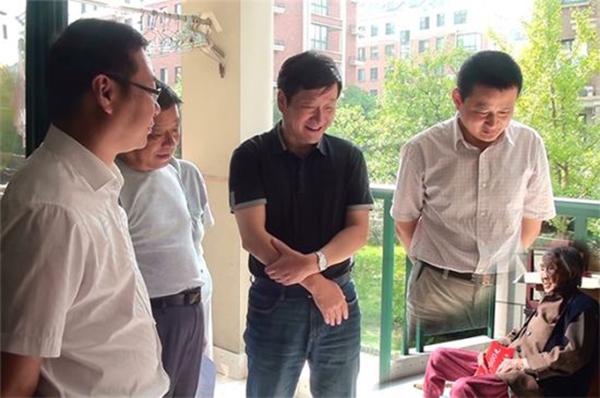 A roundup of online political cartoons from the past week. Click any image to launch slideshow. 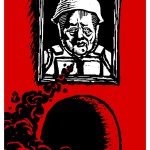 On October 28, an SUV crashed into the guardrail of Jinshui Bridge–in front of the Forbidden City and Mao’s portrait–and burst into flames. Five people were killed and 40 injured. The Chinese central government has called the crash a terrorist attack by Uyghur extremists and detained five suspects on the 30th. The government has been tight-lipped about the situation. BBC and AFP reporters were detained by police, and online posts about the incident were deleted en masse. A senior military official in Xinjiang was demoted yesterday, seemingly as punishment for letting the suspects carry out their plan.

Badiucao, who now contributes to CDT, gives Mao a little protection in these dangerous times. (Badiucao) 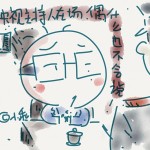 “If there’s no CCTV reporter there, I can’t say anything.” (Xiao Guai) 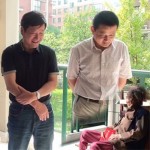 This photo of four Anhui officials “visiting” centenarian Cheng Yanchun went viral last week. Cheng appears as tiny as a doll next to the men. The officials actually did visit Cheng, but there was not enough space in her home to take a photo that fit everyone in the frame.

Netizens have years of experience pointing out Photoshop errors. The “floating officials” of Sichuan are among the most notorious. These Anhui officials will not likely be forgotten, either. (Government of Ningguo) 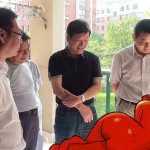 Can’t a pepper have a little privacy? Rebel Pepper is a popular online cartoonist who was detained for several days in October after posting an illustration poking fun at the official response to flooding in Yuyao, Zhejiang. (Rebel Pepper) 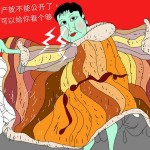 “We can’t publicly disclose our assets. This is enough for you to see.” Princeling Li Xiaolin caught flak for the luxurious fur coat she wore to the National Women’s Congress. The daughter of former premier Li Peng and head of China Power International Development, Li Xiaolin has been implicated in a bribery scandal with Zurich Insurance.

Activists involved in Xu Zhiyong’s New Citizens’ Movement have been arrested after calling for public servants to disclose their assets. (Jiu’an) 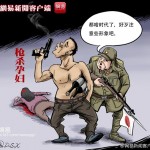 The police aren’t well-liked in China to begin with, but their image took a stupendous hit on October 28, when an officer in Guangxi shot two women in a noodle shop. One woman, who was five months pregnant, died. The officer, who was drunk at the time of the shooting, said that he fired his gun because the restaurant didn’t sell milk tea.

In this cartoon, a Japanese soldier from WWII visits the police officer.“What era are we in, anyway?” he asks, bayonet lowered. “You could at least think about your image.” Chinese TV constantly rehashes the “War Against Japanese Aggression.” You know it’s bad when the ghost of your national enemy scorns you. (Dashixiong) 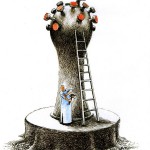 In January, President Xi Jinping called for fighting corruption among both “tigers and flies”–officials great and small–but the recent crackdown on Weibo Big Vs and liberal activists like Xu Zhiyong has disheartened those who hoped to see real change in China. Caixin reports that “unprecedented” reform awaits at the third plenary sessions of the CCP Central Committee, which begin on November 9. What will that really mean?

Artist Kuang Biao does not have much hope for real reform. Here, he shows a man in a traditional changshan pulling up his sleeves to cut down corruption. But the man will only be taking down the official stamps that have sprouted from the giant stamp on which he stands, and which has put down roots. The cartoon implies that without changing the political system itself, there can only be cosmetic reform. (Kuang Biao)