The End of Online Censorship? 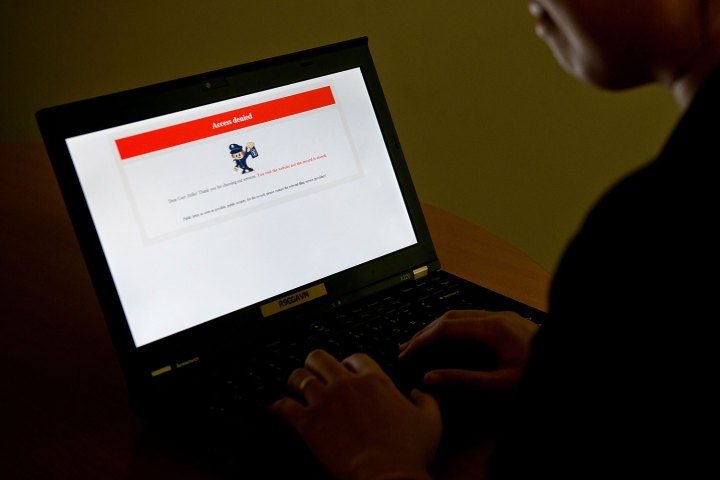 Google executive chairman Eric Schmidt predicts that universal encryption could end the very possibility of Chinese-style censorship or U.S.-style surveillance of the web within ten years. From Reuters:

In a lecture at Johns Hopkins University on Wednesday, the executive of the world’s biggest web search company made a pitch for ending censorship in China and other countries with restricted freedom of speech by connecting everyone to the internet and protecting their communication from spying.

[…] He acknowledged that encryption can be broken and said Snowden’s revelations showed the NSA has indeed done it, but added: “With sufficiently long keys and changing the keys all the time, it turns out it’s very, very difficult for the interloper of any kind to go in and do that.”

[…] “It’s pretty clear to me that government surveillance and the way in which governments are doing this will be here to stay in some form, because it’s how the citizens will express themselves, and the governments will want to know what they’re doing,” Schmidt said.

“In that race, I think the censors will lose, and I think that people would be empowered.” [Source]

World Wide Web inventor Tim Berners-Lee said on Thursday that he believes Beijing will eventually end online restrictions of its own accord. From Reuters:

“The Berlin Wall tumbled down, the great firewall of China – I don’t think it will tumble down, I think it will be released,” he told Reuters by telephone.

“My hope is that bit-by-bit, quietly, website-by-website, it will start to be relaxed,” he said. “The agility of a country which allows full access to the web is just greater; it will be a stronger country economically as well.”

[…] “The citizens are not really in a position to smash the great firewall because the government controls the Internet, the Internet companies,” said Berners-Lee, 58.

“All that can happen is that the government realises it is not in their interests, that it is holding up the economy, holding up the development of the country.” [Source]

In the meantime, activists are pursuing other avenues. At TIME, Emily Rauhala describes a new initiative by GreatFire.org to mirror CDT and the recently blocked Chinese-language cn.reuters.com on widely used cloud platforms, effectively daring Chinese authorities to inflict the collateral damage that blocking the mirrors would incur:

Last Friday, as part of an ongoing crackdown, China blocked the Chinese-language websites of Reuters and the Wall Street Journal. By Sunday, GreatFire.org, an anti-censorship group, effectively “unblocked” the [Reuters] site by building a copy, called a mirror site, that is hosted by Amazon Web Services. To shut down mirror sites like this, GreatFire says, China would have to block their cloud storage — calling attention to censorship and potentially jeopardizing Chinese businesses with Amazon-hosted sites.

On Wednesday, they used the same technique to create a mirror for China Digital Times, a media organization that calls attention to Chinese state censorship and is blocked on the Chinese mainland. “This is a shot across the bow, directed very much in response to this latest censorship push,” says Jason Q. Ng, research fellow at the University of Toronto’s Citizen Lab. “It’s definitely a really clever way of breaking down the Great Firewall.”

[…] What’s so interesting about GreatFire’s strategy is that it highlights China’s connections to, not its isolation from, the rest of the Web. This type of mirror site could have been built years ago, Smith said, but it would not have had the same effect. The strategy rests on the fact that such a large number of Chinese sites, including businesses, use cloud storage services owned by Amazon and Google. “We think if the Chinese authorities were able to block the mirror sites, they would have,” he said. “We have put them in the position where they have to make some difficult choices.” [Source]

"Unblocked" our friends at @CDT – Chinese netizens can now access https://t.co/f0oXOhFydk without use of circumvention tools

GreatFire.org’s “Charlie Smith” elaborated in a blog post, ‘Look Ma! I can see through the great firewall!‘

The reason why we chose to mirror the Reuters Chinese web site was to show the authorities and Chinese internet users that there are holes in the great firewall. To plug this hole, the Chinese authorities have two options. They can block the Amazon and Google domains, thereby bringing down thousands of websites in China that rely on these web services. This will bring the issue of online censorship to a very large group of people in China. The other option is to force Amazon or Google to remove our sites willingly. We have previously reported that Apple willingly remove OpenDoor, an Internet circumvention tool, from the China App store and this week there were reports about self-censorship at Bloomberg. We hope Amazon or Google will not practice the same kind of self-censorship.

There is a third option. Mr. Xi Jinping, we hope you are listening. Just let this episode slide. Pretend it did not happen. Do nothing to stop this. Or, better yet, lift the block on these two websites and the hundreds of others. Do it in one swift movement. You will catch everybody off guard. And you will create your own lasting legacy as a true reformer. [Source]

The reform blueprint issued by the government last Friday, however, offers little hope for such a turn of events. As Rauhala previously wrote at TIME:

Judging by the statement, Beijing is pretty worried its censors can’t keep up. “As the qualities of Internet media grow stronger, online media management and industry management cannot keep up with development and change,” it reads, according to a China Media Project translation. Of particular worry are real-time communication tools like Twitter and WeChat, which have “scale and social mobilization capacity.” The answer, leaders reckon, is a strengthening of “public-opinion channeling” in the name of “online information order” and “national security.”

[… I]n terms of censorship, what’s most interesting about the document is the way it links social media to national security — and, we can only assume, the newly created National Security Commission. “I suspect that enhanced media controls, and particularly Internet controls, will play a central role in this unfolding project of national security,” said China Media Project’s David Bandurski, in an e-mail. “The language in the decision makes it clear that press control, or public-opinion guidance, remains a key priority for the leadership.” Reform may be the new buzzword in Beijing, but the Great Firewall is looking pretty solid. [Source]

At the University of Nottingham’s China Policy Institute Blog, Min Jiang argued that China’s “neo-authoritarian” web governance is likely to endure and even spread:

China’s Internet governance model, which can be labeled “neo-authoritarian,” combines expansive market development, extensive surveillance and political censorship. Despite increased access to information, public speech, and opportunities for collective action through the Internet, the Chinese regime proves “resilient” (Nathan, 2003), employing a variety of means to manipulate the Internet and boost its own legitimacy. Not only does the stunning development of capitalism in China fly in the face of “liberation by markets,” Beijing’s sophisticated control of the Web also calls into question the “liberation by technology” thesis (e.g. Kalathil & Boas, 2003; Morozov, 2011). After all, capitalism may not need democracy. Nor is the democratization of Web access the same as democratization of society. In the next few decades, without any serious challenges to the current political arrangement, China’s Internet policy is likely to be dominated by a neo-authoritarian model of Internet governance. Traditional liberal democracies, especially the U.S., also face serious challenges. As the NSA scandal revealed, the U.S. government failed to lead by example or live up to its own promise of “Internet freedom” that it so hypocritically boasts elsewhere. As all powerful states and corporations are subject to power abuse, a neo-authoritarian model of Internet governance has emerged as a real threat to the utopia of an open, globally connected Internet that Internet pioneers have dreamed of. A new Internet world divorced from principles and actual practices of openness, tolerance, civility and liberty is a cyber nightmare. [Source]