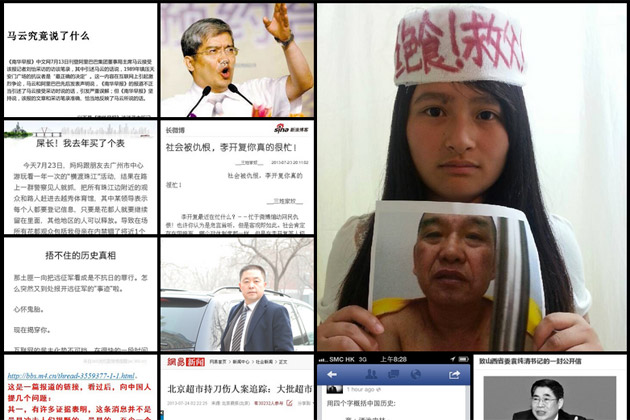 ProPublica has launched an interactive feature of tens of thousands of images that have been censored from Weibo, in an effort to show what topics are likely to be targeted:

How Sina Weibo censors its users is as revealing as the content that appears on the site, and for the past five months, we’ve been watching the watchers. We’ve created an interactive feature, launching today, that allows readers to see and understand the images that censors considered too sensitive for Chinese eyes.

[…] For five months, our software has been quietly checking 100 Weibo accounts, keeping track of every post containing an image and returning repeatedly to see if those posts were deleted. Our collection has grown to nearly 80,000 posts, of which at least 4,200 — more than 5 percent — were deleted by censors.

We also gathered a team of people proficient in Mandarin to read and interpret 527 deleted images collected during a two-week window this summer. Among the key events that occurred in this period: The indictment of Bo Xilai, a disgraced Chinese political leader; a protest by female police officers; and the arrest of Xu Zhiyong, the co-founder of a pro-democracy movement that is still being suppressed. [Source]

See also CDT’s projects which track Weibo censorship: a list of “sensitive words” that have been blocked from Sina Weibo search, including the terms “weibo” and “censor” and translations of censored Weibo posts.

Sina recently further cracked down on users by closing or otherwise disciplining 100,000 accounts for breaches of online content regulations. One of the accounts closed belongs to outspoken history scholar Zhang Lifan, who had over 300,000 followers. From the South China Morning Post:

According to freeweibo.com, a website that keeps track of all censored posts on Sina Weibo, Zhang’s last Weibo post was published at 1.47pm on Tuesday before his account was deleted. In it he asked for confirmation of a repost that claimed an official was imprisoned for pro-democracy remarks.

The deletion of Zhang’s online presence coincided with the conclusion of the third plenum, a Communist Party meeting outlining political and economic strategies, and came amid reports by Xinhua news agency that the country’s top leaders have decided to set up a national security committee.

“I noticed some online users suggested that I was the first victim of the emerging new national security apparatus,” Zhang said. [Source]