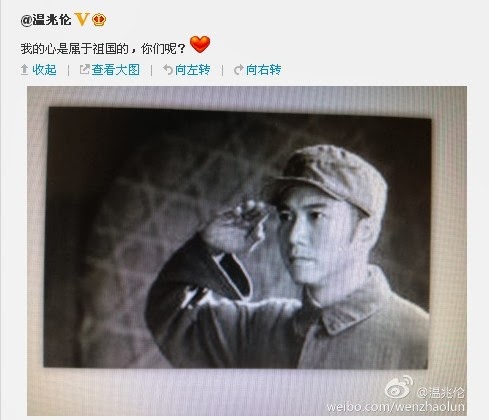 A Hong Kong celebrity is staunchly defending China on Weibo, and claims to have reported the IP addresses of users whose criticisms of him were shared over 500 times–a “transgression” punishable with a prison sentence.

On October 26, Hong Kong actor Deric Wan Siu-Lun shared his joy at finding a Starbucks in the Shenyang airport on his Weibo. His post came days after CCTV aired a segment which highlighted the steep price of a Starbucks latte in China compared to other countries. That segment was met with criticism online.

@温兆伦: As a fan, I was so happy to suddenly spot it in Shenyang’s new airport after I went through security. Have a happy weekend! One hour after his initial post, Wan sent out another weibo, this time hinting that he agreed “with the official media’s attack on Starbuck’s exorbitant prices” (官媒打击星巴克价格虚高). “I fully support any decision made by the central government, and am devoted to the motherland” (绝对支持中央的任何决定、忠于祖国) he added.

He continued posting about his humble beginnings and fervent patriotism over the following days:

@温兆伦: Who says that everything has a good side and a bad side? Consumption and living standards are different in every country. In Hong Kong, buying a car is cheap but maintaining it is expensive. On the mainland, buying one is expensive and maintaining it is cheap. It costs 5 yuan to buy one orange in Hong Kong, but 5 yuan can buy 1 gram of oranges on the mainland. I absolutely support any decisions made by the central government! I am a citizen who is loyal to my motherland. Is it that if you support Deric Wan, that you can’t be fans of other idols? You smart people all got this! Long live the motherland!

@温兆伦: Nobody should belittle themselves. I’ve never been to college and come from a poor family. I started working part-time for 900 yuan a month while I went to school, and to this day I don’t have much. I’m not a wealthy man but I have a wealthy mind. Enough is as good as a feast. You guys are much more blessed then I am. Come on! A bright future awaits for you! Let’s go!

@温兆伦: My parents died early. Now I don’t have parents but I’m not afraid, because I still have my country, China! No matter where I was born and where i die, I am Chinese! “My heart belongs to the motherland. What about you?”

Wan was born in Hong Kong in 1964, three decades before the island colony was handed back to China by the UK. Many in Hong Kong complain about Beijing’s reach; protesting teachers, parents, and students in the summer of 2012 successfully kept “patriotic education” out of the public school system. But Wan, who acts in films in both mainland China and Hong Kong, proclaims his love of China:

@温兆伦: You shouldn’t have extravagant hopes that people who don’t love their country will contribute much to others or to society, because what they love the most are themselves. I’m thankful that Hong Kong returned to the arms of the motherland in 1997. As a Hong Konger, I was stateless before 1997. Now I proudly declare: My country is China. I am a flesh-and-blood Chinese! No matter how you criticize me, you can’t change my patriotic heart!

@温兆伦: Hong Kong people of course love Hong Kong as well, but it’s frustrating that the entertainment tabloids in Hong Kong really are so “entertaining”! All the newspaper stands filling the streets sell tabloids full of “negative energy.” People who get it think they can just buy and read gossip and be done with it. You are wrong. It’s just like committing suicide through slow poisoning. I leave, I don’t buy, I don’t look, and I really hope [the tabloids] don’t mention my name. It’s all for the sake of staying away from that devilish “negative energy”!

Negative comments gathered on Wan’s posts, although he does have supporters on Weibo, too.

@温兆伦: Several days ago I expressed my “patriotism” on Weibo, attracting many “anti-patriotic” people who used so many words to insult Chinese culture and virtue. “Patriotism” is my personal choice, and these ignorant “anti-patriotic” people only expressed their frustration with society on my weibo. I very much understand your feelings, your attitude, and some of your experiences, but “we are born of the selfsame root, so why should we torment each other?” If there was no country, how could we have a family?

Then Wan took an unusual step: he announced that his colleagues were handing over the IP addresses of Weibo users whose negative posts had been reposted more than 500 times. According to a new legal interpretation, false information shared online this many times could face up to three years in prison:

@温兆伦: Over the past two days some colleagues worked hard to trace harmful weibo posted under my name which were reposted over 500 times, and submitted the posters’ IP addresses to the relevant agencies to handle. For those that are very close to 500 reposts, I do hope you don’t reach that number, since you know the consequences better than I do! I have shut down the comment section because I don’t want to see you cause trouble because of a sudden impulse. What’s the point? “It’s not a crime to love your country!”

Some users stand by Wan:

@redflower_青霰: Support the true, the good, and the beautiful. Be good citizens of the country. Deric is exquisite!!

@正道者鬼道3: China these days is a real freak show. The people who love their own country are being attacked on all sides.

But others lambast him:

@剃了羊毛还有皮: Do you dare give up your Hong Kong residency and move your household registration to the mainland? That is your motherland!

@glimho: When did Deric Wan become a patriotic Internet commentator?

@海豚阿德书店: No need to say anything further, join the Party.

@假装在纽约: Report the IPs? Even an expert Fifty Center wouldn’t do that.

@网易网友: Is this your country? The one where your king lets you eat ditch oil and genetically modified food? When did they ever see you as human beings? You’re a bunch of slaves without realizing it.

@温兆伦: With all due respect to the media: over 90% of the comments on my weibo are supportive of patriotism. I firmly believe that 99% of the folks in my motherland are patriots. Why did the media write the headline “Deric Wan’s High-Profile Patriotism on Weibo Met with Insults,” rather than “Deric Wan Supported for Being Patriotic”? Does the buzz of a fly drown out the voices of 1.3 billion patriots? Thank you for the support from all the patriots! Sorry for the disturbance!