The New Face of Chinese Propaganda 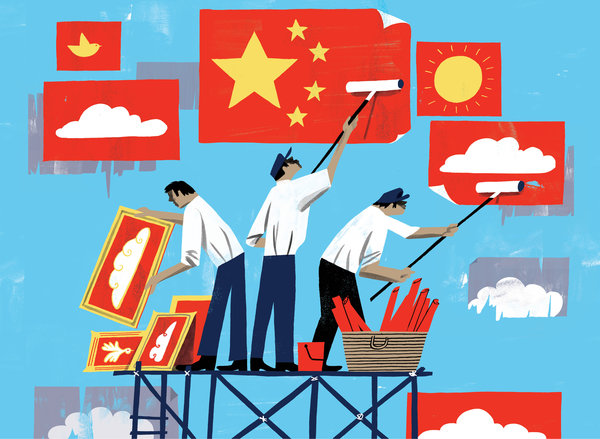 Although the China Dream does not yet have an official definition, provincial versions (the Henan Dream, the Guangdong Dream) and thematic versions (the Space Dream, the Aircraft-Carrier Dream, the Sports Dream) have sprung up. A hospital that specializes in infertility treatments in Chengdu, in Sichuan Province in southwestern China, even trotted out this message: “The China Dream, the Pregnancy Dream.”

[…] Like the slogans of my childhood, today’s are punchy, catchy and direct. I imagine that, as in past decades, they will influence the way people talk and think. But their flaw is their crudeness and lack of internal logic. Why does a strong Communist Party necessarily mean happiness for the people? Where is the evidence for this claim? Who should “sing a folk song for the party”? All 1.3 billion Chinese?

I have nothing against singing, but I doubt that party officials have time to hear it, given that they are too busy to listen to the tens of thousands of petitions filed each year by ordinary Chinese who travel to Beijing to complain about corruption or injustice in their hometowns.

[…] But my old schoolmate, the party member Mr. Lin, sees it differently. “Of course it’s stupid!” he told me. “But who cares? We can stick that stupid stuff on all those walls. Can you?” [Source]