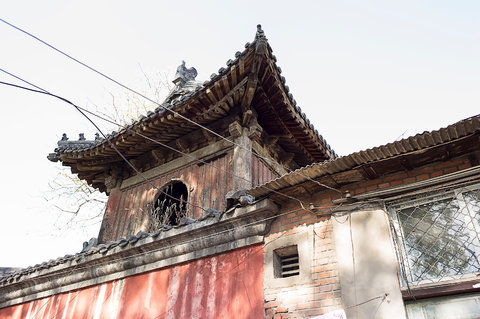 Yet the real threat to the temple — dozens of historically and religiously significant buildings begun in 1581, the ninth year of the reign of the Wanli Emperor, and given its present name in 1734 during the Qing dynasty — isn’t decay, say residents and conservationists. It’s redevelopment.

[…] “In 500 years, if someone arrives here from the moon, how will they know China had 5,000 years of culture? Where will they see it? It’s all just concrete,” Ms. de Biolley said, gesturing at the road outside. The government plans to raze, then raise again, much of the Drum Tower area, constructing plazas where there were none and erecting traditional-style gray brick houses. [Source]

South China Morning Post’s Amy Li reports the demolition of a late Qing dynasty temple in Fuzhou on Sunday, a case that has been highlighted online by singer Faye Wong. The temple has already been replaced, but many feel that this fails to make up for its loss.

The two abbots at the Ruiyun temple, in their 70s and 80s, had refused to leave the Fuzhou temple even after it was reduced to ruins by demolition workers on Sunday. They were taken away on Wednesday morning by security guards, Chinese online news portal ifeng.com reported, quoting witnesses at the temple. Abbots had phoned once for help after they were brought away, but weren’t able to be reached since, said sources.

The whereabout of the missing abbots and the forced demolition of the 117-year-old house of worship has angered China’s religious community. Thousands protested on Weibo, demanding respect and protection of religious sites.

[…] To compensate for the loss of the historic venue, the city has spent 6 million yuan (HK$7.61 million) building a brand new temple next to the old one with a bigger gross floor area. The construction was finished by July and is ready for abbots to move in, said the report. The city plans to build a primary school, whose old campus was also demolished, at the current location of the temple. [Source]

Anger previously erupted over plans to demolish buildings at a Buddhist complex in Xi’an. There is life after demolition for a few old temples, at least: a new exhibition of contemporary Chinese pieces at New York’s Metropolitan Museum of Art includes Ai Weiwei’s Map of China, a sculpture made entirely of wood salvaged from the destruction of Qing dynasty temples.