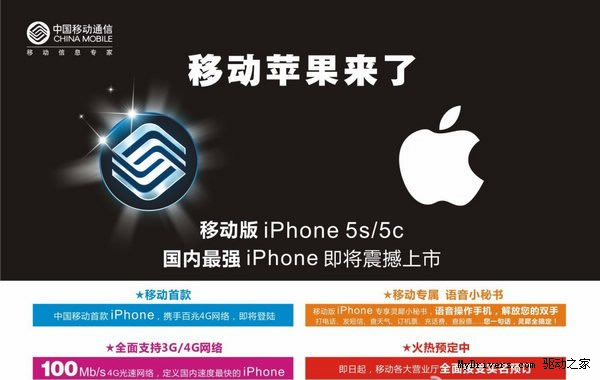 The Wall Street Journal reports from Beijing, where Apple CEO Tim Cook and China Mobile chairman Xi Guohua held a press briefing about a new deal between the American multinational and the world’s largest mobile network:

Apple Inc.’s deal to offer iPhones through China Mobile Ltd. represents a major coup for its chief executive Tim Cook, who signaled Wednesday the company plans to broaden its alliance with the Chinese carrier to grow in the world’s largest smartphone market.

The deal, which took six years of negotiations, is the last piece of the puzzle for Apple in China, officially making iPhones available through all three of the country’s state-run telecom carriers. With preorders for the iPhone through China Mobile already exceeding one million, the agreement will likely boost Apple’s sales in the coming year at a time when its earnings growth is slowing and its global smartphone market share is slipping.

For Apple, the stakes are high in China: the country is the world’s largest smartphone market by shipments and the deal with China Mobile, the biggest carrier, gives it access to an additional 700 million subscribers as well as new sale points. Apple is also currently behind market leader Samsung Electronics Co. 005930.SE -0.23% in terms of market share in China, ranking fifth in the third quarter, according to research firm Canalys.

[…] Despite the deal, Apple faces headwinds in China as high prices for its smartphones and relatively low carrier subsidies have led consumers to buy cheaper options that runGoogle Inc. GOOG -0.07% ‘s Android operating system. According to Apple’s China website, the unsubsidized retail price of a 16-gigabyte iPhone 5S is 5,288 yuan ($870), while an iPhone 5C with the same storage capacity costs CNY4,488 ($738). In comparison, an Android-based phone with similar hardware from startup Xiaomi Inc. costs about $327. [Source]

In a Wall Street Journal Digits blogpost of Cook’s response to press questions, Cook notes a lack of concern over competition from cheaper domestic brands:

Q:  Are you concerned about  growing competition from cheaper handsets in China?

Cook: I’ve always thought it was important for an individual and a company to have a North Star, something that doesn’t change.  Many many things can change but the North Star should be clear, and for Apple that’s always been making the best products in the world. That’s our strategy and that’s not changing today or tomorrow or the next day or the next year.

When you really back up and look at what’s happening in China the usage numbers are staggering. Fifty-seven percent of the mobile browsing in China is done on iOS devices. Now there are many different views of unit market share and you can choose to look at whichever one you think is most reputable, but for us that is not our North Star, we don’t get up in the morning saying we want to sell the most, we get up saying we want to make and create the best, and so that’s our strategy and it doesn’t change. [Source]

A CNBC broadcast focuses on the (as of yet unannounced) subsidies that China Mobile will offer on their iPhones:

[…] Woz said he gets paid to speak at events around the world, but that Xiaomi did not pay for his endorsement.

[…] Woz and Lei both took the chance to pose with and discuss some of Xiaomi’s products. Woz is apparently using a Xiaomi Mi3 smartphone now, although it’s unclear how useful it might be outside of China.

“I’m playing with mine. I like it so far. I’ll tell you if I have problems,” Woz said. “Xiaomi has excellent products. They’re good enough to break the American market.” [Source]

Despite Wozniak’s enthusiasm about Xiaomi’s new product, a report from Reuters notes that other Chinese handset makers are having a hard time breaking into the U.S. market due to poor brand recognition, national security concerns, and carrier contracts:

In two years, China’s three biggest handset makers – Huawei, ZTE Corp and Lenovo Group Ltd – have vaulted into the top ranks of global smartphone charts, helped in part by their huge domestic market and spurring talk of a new force in the smartphone wars.

Chinese companies took up more showspace at [the Las Vegas Consumer Electronics Show] CES than ever before, eager to tout their products to the world’s largest electronics market. Still, analysts said it will likely take years for the Chinese to make headway in the United States, where arguably the only Asian brand to have succeeded is Samsung Electronics Co Ltd.

Aside from their struggles to get onto store shelves – U.S. carriers sell nine-tenths of the country’s handsets – Chinese handset makers continue to grapple with low brand awareness, perceptions of inferior quality, and even security concerns.

[…] In the third quarter of last year, ZTE and Huawei accounted for 5.7 percent and 3 percent of all phones sold in the United States, respectively, trailing Apple Inc’s 36.2 percent and Samsung’s 32.5 percent, according to IDC. [Source]