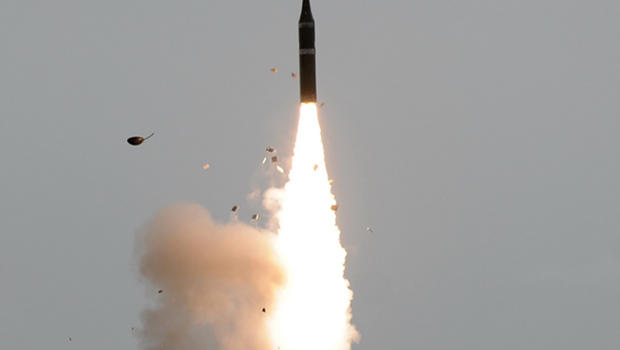 As historically rocky Sino-Japanese relations have been growing ever more tense amid the ongoing Diaoyu/Senkaku Islands dispute, the PLA has flexed its naval muscles more than once, and Japan’s Prime Minister Abe has been trying to lessen restrictions on Japan’s unified military forces. Meanwhile, the U.S. is hoping for stability in the Asia Pacific, a region in which they have many expressed interests. When China announced its Air Defense Identification Zone (ADIZ) over the East China Sea, Japan protested, and the U.S. made clear moves to express disapproval of Beijing’s military posturing—though U.S. VP Joe Biden seemed intent on avoiding the topic while visiting Beijing shortly afterward.

Yesterday, the People’s Liberation Army posted pictures from of a nuclear missile test, an act that the South China Morning Post describes as a response to U.S. military moves in the Asia Pacific:

The 17 photos published on the PLA Daily’s website on Tuesday provided the first glimpse of a live drill involving the Dongfeng-31 since its delivery to the Second Artillery Corps in 2006.

[…] The missile has an estimated range of nearly 10,000 kilometres – enough to deliver a nuclear warhead to the capitals of Europe or the west coast of the United States. Military experts said the release was a warning to the US not to interfere in the country’s territorial disputes with Japan over the Diaoyu Islands, or Senkakus, in the East China Sea.

“The disclosure of the Dongfeng-31 at this time obviously aims to respond to the United States’ two big military moves in Japan, which make Beijing believe it is going to meddle in the territorial disputes between China and Japan,” Wong said. [Source]

Earlier this month, China’s Defense Ministry announced the successful test of a hypersonic glider capable of carrying nuclear weapons, and then quickly stressed the benign-nature of this technology after American media outlets reported anxiety in the Pentagon.

As the PLA Daily published its disquieting photo gallery, U.S. Deputy Secretary of State William Burns was in Beijing meeting with Chinese officials. CBS reports on the senior diplomat’s visit and the tension surrounding it:

As Burns arrived in Beijing earlier this week, China’s army showed off the first-ever images of its advanced Dongfeng-31 intercontinental ballistic missile being tested.

[…] “Seeing this photo, Americans will of course take it as a sign of more remarkable military threat,” Shi Yinhong, a professor of International Relations and director of the Centre on American Studies at China’s Renmin University told CBS News. “But China is determined and will continue its military buildup despite the fact that America is discontent.”

[…] Burns met Thursday with senior Chinese officials, including Vice Foreign Minister Zhang Yesui and Vice President Li Yuanchao. Li urged the two countries to expand pragmatic cooperation and to carefully manage differences and “sensitive” issues, according to China’s state news agency Xinhua. “China and the U.S. are making great progress in certain areas of their relationship, such as the economy and certain international issues: Syria, Iran and North Korea,” notes Shi, “but the U.S. is increasingly worried over China’s military development.”

Burns also urged China to “work constructively with its neighbors to reduce tensions in the East China Sea and the South China Sea,” according to the U.S. Embassy in Beijing. [Source]

The U.S. has recently been criticized by some domestic commentators for “playing peacemaker” in the region when it should instead “make China feel uncomfortable.” After Abe’s visit to the Yasukuni Shrine—a memorial to millions of Japan’s war dead, including 14  convicted WWII war criminals—angered many in China last month, the Wall Street Journal reports that U.S. officials are looking for assurance that Abe will make no further visits. At the World Economic Forum yesterday in Davos, Abe defended his visit, claiming that he had no intention of angering geopolitical neighbors:

U.S. officials say they are seeking assurances from Japan that Prime Minister Shinzo Abe won’t repeat a visit to a war shrine that angered China and South Korea and will ask Mr. Abe to consider reaffirming Tokyo’s previous formal apologies over World War II in a bid to ease tensions in East Asia.

[…] U.S. officials said they were looking for assurances from Mr. Abe that he would refrain from further comments and actions that ruffled Japan’s neighbors, who are already suspicious of his policy agenda. The officials said they are conveying the requests privately through a series of diplomatic meetings in Washington and Tokyo.

The officials said they were urging Japan to reach out to South Korea to end their bickering, which is complicating efforts for the key U.S. allies to work together on broader regional challenges. And, the officials say, they are also asking Tokyo to take steps to address decades-old disagreements over forced prostitution at Japanese military brothels in World War II.

It isn’t clear what the U.S. would do if its requests are rebuffed. A Japanese Foreign Ministry spokesman declined to comment.

[…] Some experts think that now that Mr. Abe has fulfilled his long-stated desire to visit Yasukuni as national leader, he will show more restraint. But others say sky-high approval ratings and strong domestic support for the shrine visit will only embolden him to pursue his nationalist agenda. [Source]

As the U.S. pressures Abe to refrain from any further provocative visits, Japan’s Asahi Shimbun reports faltering American support of the Japan-U.S. Security Treaty, likely due to concerns about the Diaoyu/Senkaku dispute:

The number of ordinary Americans who support the Japan-U.S. Security Treaty has dropped to an all-time low, according to an annual Japanese Foreign Ministry opinion poll released Dec. 19.

The Japan-U.S. Security Treaty allows for the stationing of U.S. forces in Japan for the security of Japan and for maintaining peace and security in the Far East.

[…] As some U.S. citizens fear that the United States might become involved in disputes between Japan and China, the concern could have led to the sharp fall in the opinion poll, some observers said.

The survey also asked, “Which country in Asia do you think is the most important partner of the United States?”

China was the clear winner […] [Source]