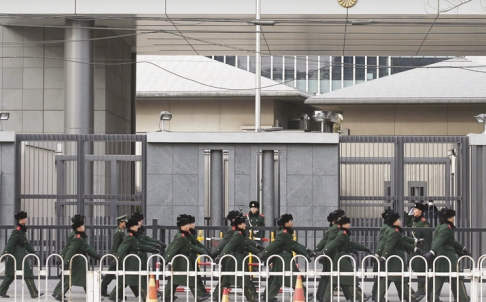 Cultural challenges from the West will be among five threats targeted by Xi Jinping’s new national security commission, according to a senior colonel writing in the Central Party School’s Study Times. The list also includes extremist groups, cybersecurity and online dissent. From Teddy Ng at South China Morning Post:

“No single agency can handle such threats,” Gong said in an article for the Study Times, the daily newspaper of the Communist Party’s Central Party School. “It is necessary to set up a high-level agency that has the proper authority to co-ordinate all forces involved.”

[…] Gong, also a professor at the National Defence University, said ideological challenges had grown. The West was imposing its values on the world, which made it difficult for China to protect its interests. Hollywood movies for example were changing the thinking and values of the nation’s youth, he said.

[…] He said the body would be tasked largely with planning, co-ordination and consultation. Power to carry out policies would stay with existing government agencies. [Source]

Gong’s comments on Western use of online communities against China reflect well-established fears. In 2012, an op-ed in the overseas edition of People’s Daily notoriously argued that the U.S. would use “rights lawyers, underground religious activities, dissidents, Internet leaders and vulnerable groups” to undermine Party rule.

The national security commission was one of many reforms announced after November’s Third Party Plenum, and has widely—though not universally—been seen as a sign of Xi’s growing power.