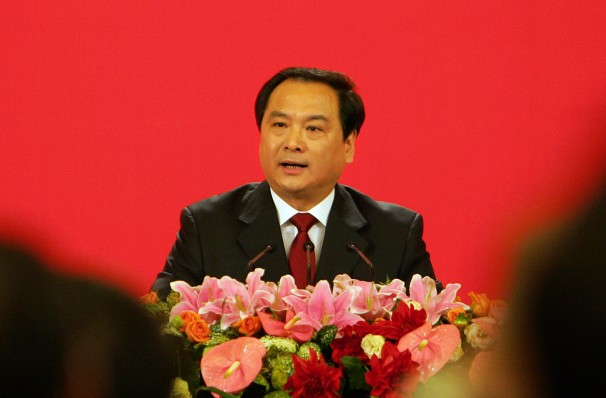 China announced on Friday that vice minister of public security Li Dongsheng is being investigated for “suspected serious law and discipline violations,” in what appears to be the latest move against former security chief and Politburo Standing Committee member Zhou Yongkang. William Wan and Simon Denyer describe the campaign against Zhou, and Li’s ties to him, at The Washington Post:

“I think it signifies that Zhou’s downfall may be just around the corner,” said Zhang Lifan, a historian and political commentator in Beijing.

[…] Li, 58, was appointed to the position in 2009, during Zhou’s tenure as a powerful member of the Standing Committee, the party’s highest ruling body. Prior to that appointment, Li had no experience in public security. He had worked for 22 years at the government-run state broadcaster CCTV and then for almost a decade as a high-ranking official in the propaganda wings of the government and party.

In 2008, shortly before his appointment, Li attended a gala honoring the Public Security Ministry. Also in attendance was Zhou. The two have appeared together frequently in state media reports of party events. After his appointment as vice minister, Li accompanied Zhou on at least two trips to inspect government bureaus in other provinces.

“It signifies Zhou’s diminishing influence that those who worked under him are now stripped of the shield once offered by his power,” said Pu Zhiqiang, a human rights lawyer who has often fought against the vast security apparatus assembled by Zhou. [Source]

While Li and other Zhou associates have been targeted in the name of battling corruption, many believe that this is simply a screen for political maneuvering by president Xi Jinping. On Tuesday, China Change posted a translation of a December 6th article by Chang Ping in Hong Kong’s Apple Daily, in which he argued that “Zhou Yongkang’s case has nothing to do with anti-corruption resolve”:

Some say the takedown of Zhou Yongkang reflects the anti-corruption resolve of the new Chinese leader Xi Jinping. At the beginning of the year, Xi Jinping vowed to crack down on both “tigers” and “flies.” So, who are the biggest tigers anyway? After Bloomberg News reported on the not-so-transparent fortunes of the Xi family, the two sites Bloomberg.com and Businessweek.com were promptly blocked by China’s Great Fire Wall, and repercussions are still being felt today. Last week, people in civilian clothes who claimed to be plainclothes police officers made unannounced “inspections” on Bloomberg’s offices in Beijing and Shanghai. This week, Robert Hutton, a reporter for Bloomberg, was banned from attending a press conference with British Prime Minister David Cameron and Chinese Prime Minister Li Keqiang. [See more via CDT.]

Zhou Yongkang is no doubt a giant “tiger.” The Chinese say, when two dogs fight, each fills its mouth with the other’s hair (狗咬狗，一嘴毛), meaning that infighting is always ugly. How should we describe a tiger fight then? Heroes trading blows, or an anti-graft campaign? Neither. Under a dictatorship, struggle on the top level is bound to be a struggle raging in the palace that has nothing to do with the rule of law. [Source]

Similarly, The Financial Times’ Richard McGregor argued in a ChinaFile conversation this week that “there is no good reason other than power politics for why Zhou and his family should be investigated instead of, say, that of the outgoing premier, Wen Jiabao, or perhaps even members of Xi’s own family.” (Wen’s family was the target of an investigation by The New York Times last year.) But Bo Xilai chronicler Pin Ho responded that Xi’s ultimate intentions remain unclear:

In recent years, people’s faith in so called “reformist” C.C.P. leaders came to naught, people don’t have the nerve to place much hope in Xi Jinping. So much less so given that during his first year in office his language and actions have echoed those of Mao Zedong, and he has so openly cracked down on liberals, to the point that some people see him as casting himself as Mao’s heir.

If this is the case, then Zhou Yongkang is just a sacrifice at the altar of Xi’s power. Xi’s is just an old-school power play. It’s no different from when [Mao] punished Xi’s father’s comrade Gao Gang (former Vice Chairman of the Party), who later later won sympathy [because Mao had used him]. But he was hardly an innocent victim, he had committed all sorts of outrageous offenses when he was in power!

But what if Xi Jingping eventually proves he is truly an ambitious reformer, then how should we regard what he’s doing today? Which is to say, how can you demand that Xi achieve everything all at once? If, as Mr McGregor’s logic seems to suggest he should, Xi were suddenly to clean out every corrupt official at once, he would be out of power in an instant. [Source]

Both agreed, though, that for now Xi appears to have established himself as “a singularly powerful leader.” The Wall Street Journal’s Jeremy Page, Bob Davis and Lingling Wei report that he has even been muscling in on areas traditionally within the purview of the premier, Li Keqiang:

There is no evidence of discord between Messrs. Xi and Li, the party insiders say. But Mr. Xi is subverting a nearly two-decade-old division of power whereby the president, who is also party chief, handles politics, diplomacy and security, while the premier manages the economy.

Having rapidly established his authority over the party and the military in his first year in power, Mr. Xi is now stepping in on the economy, making him the most individually powerful leader since Deng Xiaoping, the man who launched China’s economic liberalization in 1978. “The really big change is that Xi is saying, ‘I’m the boss, and that extends to everything,’ ” says Barry Naughton, an expert on the Chinese economy at the University of California, San Diego.

See more on last month’s reform blueprint and its implications for Xi’s political position, and some words of caution on over-confident tea leaf analysis, via CDT.