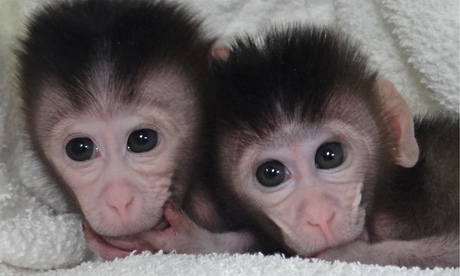 Chinese scientists’ creation of a pair of genetically modified long-tailed macaques named Ningning and Mingming has sparked excitement among medical researchers and concern among animal rights advocates. From Ian Sample at The Guardian:

The macaques are the first primates to have their genetic makeup altered with the powerful technology which many scientists believe will lead to a new era of genetic medicine.

The feat was applauded by some researchers who said it would help them to recreate devastating human diseases in monkeys, such as Alzheimer’s and Parkinson’s. The ability to alter DNA with such precision is already being investigated as a way to make people resistant to HIV.

But the breakthrough is controversial, with groups opposed to animal testing warning that it could drive a rise in the use of monkeys in research. One critic said that genetic engineering gave researchers “almost limitless power to create sick animals”. [Source]

The Chinese researchers injected single-cell macaque embryos with RNAs to guide the genome-editing process. The team modified three genes in the monkeys: one that regulates metabolism, another that regulates immune cell development and a third that regulates stem cells and sex determination, says study coauthor Wezhi Ji, a researcher at the Yunnan Key Laboratory of Primate Biomedical Research. The researchers found that the genome-editing tools created multiple changes in their target genes at different stages of embryonic development. The infant monkeys are too young for the team to yet determine if the genetic changes have an effect on physiology or behavior, says Ji. But, he adds, “data from this species should be very useful for curing human disease and improving human health.”

[…] The fact that genome editing worked to create modified monkeys suggests it might also work to create genetically modified humans. Crispr is already used to modify human cells grown in labs, but it has not yet been tested on human embryos or adults. “We believe the success of this strategy in nonhuman primates gives lots of potential for its application in humans, but we think due to the safety issue, it will take a long way for expanding this strategy to human embryos,” says Ji. [Source]

The Nanjing team describe their work in a paper at Cell journal. Although the new ‘Crispr’ technique is in use internationally, critics warn that China lacks ethical safeguards in place elsewhere. In a New Yorker profile last month, Wang Jian, head of the world’s largest gene sequencing company BGI, argued that someone ought “to blow up” the West’s “protocols and laws and regulations” governing genetic research.

If the work were eventually to lead to an effective Alzheimer’s treatment, it could arm China for a battle for which it is currently ill-equipped. Bloomberg reported this week that China has only 300 doctors specializing in dementia treatment, even as the number of cases nationwide rises to an estimated nine million.