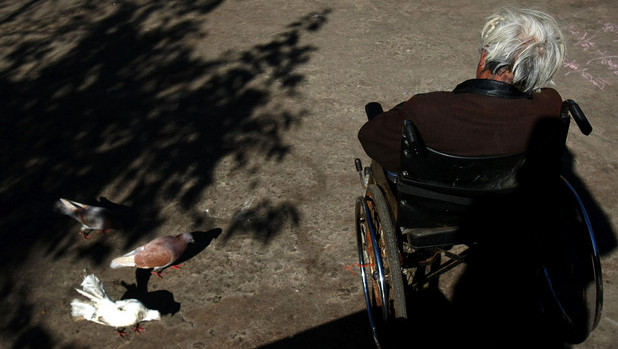 An aging population, changing lifestyles, and possibly pollution are driving up the number of dementia sufferers in China: a study in The Lancet last year estimated a 53% rise between 2000 and 2010 to 5.7 million cases of Alzheimer’s alone. The country has at most 300 doctors specializing in dementia, however, and traditional family support systems already eroded by family planning policies and economic migration are likely to be overwhelmed. From Natasha Khan and Daryl Loo at Bloomberg:

“Caring for most dementia sufferers in China is left to family members with no or limited training or support from the state and at considerable physical, psychological and financial costs to the care givers,” said Kit Yee Chan, lead author of the Lancet article.

[…] “It was very quick, in the space of 10 to 15 years it suddenly went from zero to a big problem,” said Yu [Xin, a doctor and professor of clinical psychiatry at the Institute of Mental Health at Peking University]. “In another 20 to 30 years it’s going to be a big disaster, so how to mobilize the social and academic resources? We’ll need to do it all.”

[…] It’s not just changing demographics fueling the rise of Alzheimer’s. Modernization is also playing a role. Evidence shows that diabetes, smoking, high-fat diets and hypertension are Alzheimer’s risk factors, said Raymond Chang, an associate professor of anatomy at the University of Hong Kong and founder of its Alzheimer’s Disease Research Network. The country already has the highest number of diabetics on the globe as economic development has transformed diets and lifestyles.

Some recent findings also link Alzheimer’s to air pollution, which has surged in cities such as Beijing. While the data is preliminary, one study by the University of Nevada published 2012 in the Journal of Environmental and Public Health suggests that air pollution may boost an individual’s risk of developing the disease by speeding up age-related oxidative changes in the brain. [Source]

See more on prospects for China’s elderly, the “catastrophic” rise of diabetes, and China’s efforts to wrestle with its demographic problems, via CDT.