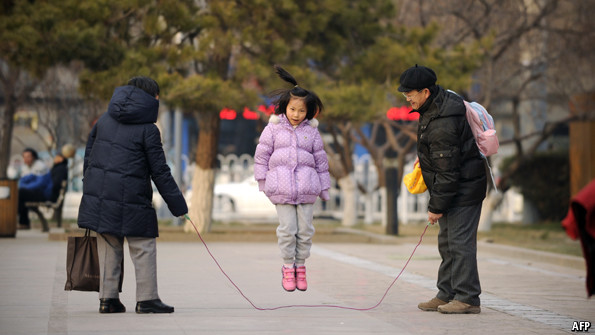 A planned relaxation of the one-child policy has been among the most widely discussed aspects of the extensive reform roadmap issued last Friday. But The Economist’s Gady Epstein writes that China’s family planning enforcers will remain in business for some time to come:

Some years in the future, the national policy will be two children per family, says Mao Qun’an, spokesman for the National Health and Family Planning Commission (the newly named combined ministry). That will further narrow the scope for ugly abuses. The forced abortions and sterilisations, illegal under the policy but still carried out from time to time, will become much more rare, for lack of law-breakers. The enforcers will have far fewer opportunities to levy fines for violating the policy (or accept bribes to ignore violations).

[…] Still, even in an optimistic scenario, China’s massive architecture of social control will remain in place. Mr Mao says a day will come when China ends the practice of dictating how many children families can have, whether one or two, and of fining and punishing transgressors. But it won’t be anytime soon. “We don’t deny there is a conflict between the country’s family-planning policy and the reproductive intentions of families and individuals,” he said at a briefing held today for a small group of foreign journalists. “We are making an adjustment today and will definitely make more adjustments in the future.” [Source]

The latest adjustment will allow couples with one only-child partner to have two children, extending an existing exception—one of many—for double-only-child couples. Uncertainty surrounds the timetable for implementation, which will be determined separately by each province. In a ChinaFile Conversation on “the beginning of the end of the one-child policy”, chinadialogue founder and editor Isabel Hilton also raised “the as yet unanswered question of China’s unregistered citizens“:

[…] They come in many categories: some couples have taken advantage of spells abroad to have a second child, but that child is not entitled to access education or health services on the return to China. Other couples simply concealed the birth of officially prohibited infants; this means that an unknown number of Chinese citizens, born in secret, remain undocumented. Will the government declare an amnesty for these shadow citizens, or must they remain a population invisible to the the state bureaucracy? Will their ambiguous status be regularized, or might it continue to the next generation? [Source]

The change would not have helped Feng Jianmei, who was forced to undergo an abortion last year while seven months pregnant. Feng was actually entitled to a second child, but had failed to obtain authorization for her pregnancy—a requirement which will remain in place—and was unable to pay a $6,300 fine. On the other side of China’s wealth gap, the exemption will make similarly little difference to film director and father of seven Zhang Yimou, from whom family planning authorities say they “just have not received a satisfactory response” regarding a fine of up to $26,200,000 for excessive fecundity.

For many Chinese, even a second child seems an unbearable economic burden. From Liz Carter at Tea Leaf Nation:

[… A]ccording to a Nov. 18 survey of 5,000 web users conducted on Sina Weibo, a surprisingly large portion of Chinese think one is plenty: 52 percent of respondents said the “economic pressure” of a second child would be too much. Chinese wages are expected to rise 8.4 percent in 2013, yet many still feel constrained. “In China, when you get married you have to take care of both partners’ parents,” explained one Weibo user. “And don’t forget the mortgage. Add another child to that and the pressure is enormous.” (The Weibo findings are consistent with another online survey, conducted on Nov. 19, in which 80 percent of respondents eschewing a second child cited financial concerns.) [Source]

The expected result is a limited, short-term “baby bump” of one to two million extra births a year—not enough to avert the problem of “growing old before growing rich.” According to U.N. projections cited by CCTV, China’s workforce will shrink by 67 million between 2010 and 2030, even as its elderly population balloons from 110 to 210 million. The weibo comment above suggests that this may already have become a vicious cycle: China needs more babies to support the elderly in future, but the burden of supporting the elderly now means it can’t afford them. Nor is the ageing population the only trend exerting pressure on China’s workforce, as Christina Larson wrote at Bloomberg Businessweek:

The absolute number of people in China’s working-age population declined for the first time last year. From factory owners’ point of view, what’s most important is the number of young people, who most often take jobs on assembly lines. From 2008 to 2010, the number of 18-year-olds dropped by one-fifth. What’s more, college enrollment tripled, from 2.2 million to 6.6 million, between 2000 and 2010. The result is a suddenly squeezed labor market. In 2000, China had 22 million 18-year-olds not in school and entering the workforce; in 2010 it had 15 million. A tight labor market drives up wages quickly, as Nobel prize-winning economist Arthur Lewis explained in his formulation of the “Lewis turning point.” In their new book In Line Behind a Billion People, authors Damien Ma and Bill Adams argue that China’s dividend has given way to a “demographic hangover.” [Source]

Another less widely noted proposal last Friday addresses the demographic problem from the opposite end. Xinhua reported that “a mechanism that gradually enables a higher retirement age threshold will be explored and mapped out.” By current law, men can retire at 60, women in the public sector at 55, and women in the private sector at just 50.

Any raising of the retirement age will be deeply unpopular. A recent poll found nearly 70% of Chinese opposed to such a change. This opposition is reportedly based on current working conditions, including “heavy workload, long working hours and lack of labor rights protection.” Even gradual improvements in any or all of these areas may help soften resistance over time. But another obstacle is that the expectations of young Chinese appear radically out of step even with the present reality. A recent poll across several countries found that Chinese aged 20-29 expect on average to retire completely at just 53. The average Chinese man, the researchers found, actually stops work at 66.

Regardless, a Global Times editorial argued, the government has no choice but to push ahead:

[…] The current retirement age of China was set in the 1950s. As the average lifespan of Chinese has increased by over 20 years compared to that time, coupled with the fact that the country is facing an aging society, a lack of pension, and a shrinking pool of workforce from 19 to 59 years of age, China has no other choice but to reform its retirement system.

[…] Some will be discontent with the reform. This requires the media and intellectuals to take great efforts to clarify for the public a real picture of the pension situation, instead of making use of the resentment in public opinion to score points of their own. The public must understand that raising the retirement age is the result of an increasing average lifespan for Chinese. It has nothing to do with politics or the interests of special groups.

Deferring retirement cannot be realized in a shower of applause. The government should be courageous enough to bear the opposition from the public in order to secure the long-term interests of the Chinese people and maintain China’s global competitiveness. As long as the reform is finalized and eventually benefits the public, negative sentiments toward it in public opinion will vanish. [Source]

But Wei Nanzhi of the Chinese Academy of Social Sciences told CCTV that later retirement will not stave off the country’s looming demographic shift either. As last week’s reform blueprint acknowledged, still other measures will be needed to accommodate it, she said, like more profit-oriented stewardship of the country’s pension fund and a higher degree of social participation in care of the elderly.

Xinhua further notes that urban and rural pension schemes will merge, while SOEs will have to contribute twice as much of their profits—30%—to public finances by 2020. All of these combined, it reports, may buy enough time for robots to come to the rescue:

So far the consensus is that these policies will slow down the speed at which China’s population ages.

This will give policy makers more time to map out a comprehensive plan to deal with the rising cost of caring for elderly citizens and gear its economy from the labor-intensive model to a high value-added one.

“It takes time for new-borns to enter the labor market,” said Zhang Chewei, a demographer with Chinese Academy of Social Sciences. “The ultimate cure for the labor shortage is to develop technology and enhance productivity.” [Source]

See more on China’s pension fund via CDT, and on issues surrounding the retirement age from Adam Minter at Bloomberg last year.

While the new one-child exemption may offer a limited demographic boost, it serves a more immediate political purpose in common with many of the newly announced reforms: “to address the many grievances of ordinary Chinese people to shore up support for continued one-party authoritarian rule.” University of California and Fudan University professor Wang Feng, while urging Beijing to swiftly abolish the “senseless” one-child policy altogether, wrote at The New York Times that:

The phasing-out of the one-child policy has overshadowed all the other decisions coming out of the influential once-a-decade meeting known as the Third Plenum. The public has embraced the change with unexpected enthusiasm and good will. They see the change as a clear and irrevocable move, a break from empty promises. They see it as a regaining of personal freedoms. And they see it as a sign that the government in Beijing is finally catching up with the times. This seemingly small measure has generated enormous good will, and political capital, for China’s new leadership. It will also help blunt criticisms of abuses like forced abortions and sterilizations, and of the practice of sex-selective abortions. [Source]

The new exemption was also credited with an immediate effect on various more-or-less baby-related stocks. From Isabella Steger and Laurie Burkitt at The Wall Street Journal:

Shares of C&S Paper Co., which makes tissues that often are used to clean up after small children, jumped almost 10% on the Shenzhen stock market. “Right now the products we manufacture for children account for less than 10% of our total products, but we plan to increase production in children’s products in the near future,” said C&S General Manager Liu Yuwu.

Shares in two piano manufacturers, Hailun Piano Co. and Guangzhou Pearl River Piano Group Co., each closed almost 10% higher Monday, on the theory that Chinese parents would buy more pianos if they had second children. Neither company responded to requests for comment.

But some companies that have been beneficiaries of the one-child policy couldn’t get any love. Shares of Humanwell Healthcare (Group) Co., a producer of condoms and oral contraceptives, tumbled when trading started but recouped earlier losses to close 0.8% lower in Shanghai. Humanwell couldn’t be reached for comment. [Source]