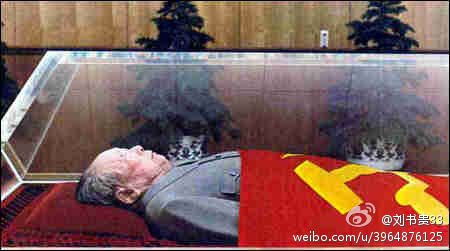 环球网: Abe pays homage at the Yasukuni Shrine, and speaks of showing respect for departed spirits. In today’s world, which country’s leaders venerate the dead with no regard to good and evil like Japan does? This is a unique form of necrophilia, and not an act of benevolence. It shows devotion to the perpetrators of war crimes. They never offered sacrifice to the countless innocent civilians who were cruelly slaughtered during WWII.  Is there any future for Japan if it keeps up this dream of hugging the mummies of war criminals?

Netizens were quick to note inaccuracy and hypocrisy in the Global Times’ evocative “mummy hugging” claim:

晋商-孙志强: [Old Sun’s Word] The term “necrophilia” is really a slap in the face, but perhaps it’s not the Japanese who got hurt. Nowadays, only a few places have mummies. Whom is the Chief Editor Hu Xijin trying to attack here?

While many similar comments were made, one Weibo user re-posted the Global Times’ message along with a picture of China’s own venerated mummy: Amid an ongoing crackdown on Internet rumors, another user wondered if the Global Times might face legal trouble for their weibo:

陆伟民律师: Doesn’t Global Times have correspondents in Tokyo? Could you first investigate before speaking out? Since when does the Yasukuni Shrine have mummies in it? Shouldn’t official media be held legally responsible for starting rumors? The attached photo was taken by me at the Yasukuni Shrine in 2012. There were only memorial tablets, no mummies.