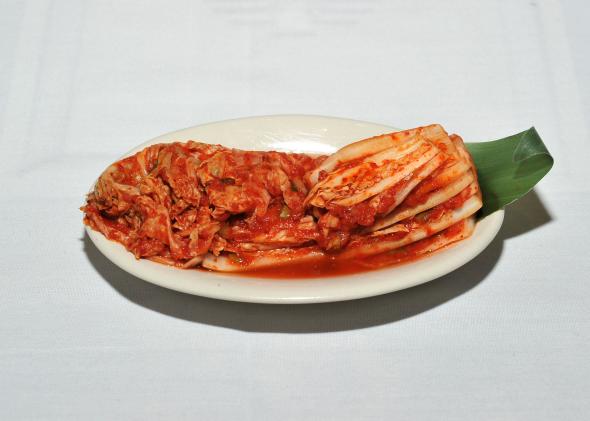 The South Korean government wants China to change its name for kimchi, Victor Mair notes at Slate, because the current translation fails to distinguish the Korean staple food from any other “picked vegetables” or pàocài 泡菜.

It’s important to first note that it’s typical for the Chinese to call foreign things whatever they jolly well please. For example, the Mandarin word Niǔyuē 紐約—literally “button; knob; handle; wrench; turn” + “approximately; agreement; appointment”—neither sounds like “New York” nor even means what that name does, but that doesn’t stop the Chinese from referring to the Big Apple that way. It is interesting, however, that the South Koreans have been winning some battles recently with the Chinese over how to refer to things that mean a lot to them, even when the Chinese aren’t very happy about making the requested (demanded) changes.

One of the biggest victories was getting the Chinese to accept Shǒu’ěr 首爾 as the Chinese way to refer to Seoul, instead of Hànchéng 漢城 (“Han City”). Naturally, calling their capital “Han City” rankled, since “Han” is the name of the main Chinese ethnic group. In contrast, Shǒu’ěr 首爾 both sounds like “Seoul” and has a felicitously appropriate meaning (viz., “head” [shǒudū 首都 means “capital”]) + “thus; so”). [Source]